Josh Duhamel: Axl Has Started to Test Me 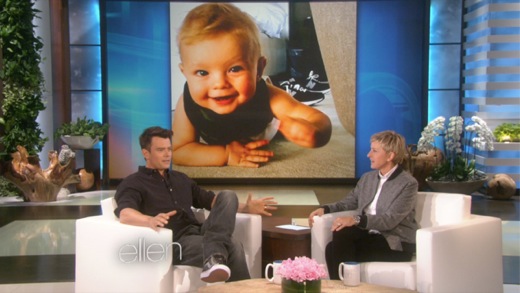 Josh Duhamel is smitten with his son Axl!

While making an appearance on The Ellen DeGeneres Show on Tuesday (Oct. 7), the Safe Haven actor gushed about his 1-year-old son and how his wife Fergie has adjusted to motherhood.

“He’s walking. He’s fully mobile. I just took him to the beach for the first time. I feel a little guilty about that because we live two miles from the beach,” Duhamel told. “I’ll take him to the pool with me and we have swimming lessons, but when you have the water rushing up at you it’s a little bit different. He freaked out a little but he’s fine.”

“He’s also defiant. They get to a certain age and they start to test you a little bit. He’ll stick his finger up my nose and I’ll say, ‘No. Don’t do that,'” Duhamel laughed. “Then he’ll stick it up his nose. He thinks it’s funny.”

The actor praised his wife who didn’t have a lot of experience with children for adjusting so well to motherhood.

“Well in the beginning it was me, but she’s really improved her diaper changing skills in the last year. It’s very impressive. She’s as good at it as I am now. I had two younger sisters so I had a lot of practice growing up. She had never held a baby before,” Duhamel explained. “I don’t think she ever really held a baby, especially a brand new one before we had one.”

Jessica Simpson to her Kids: Stop Getting Older!

Jennifer Lopez Takes Her Children to a Dance Studio