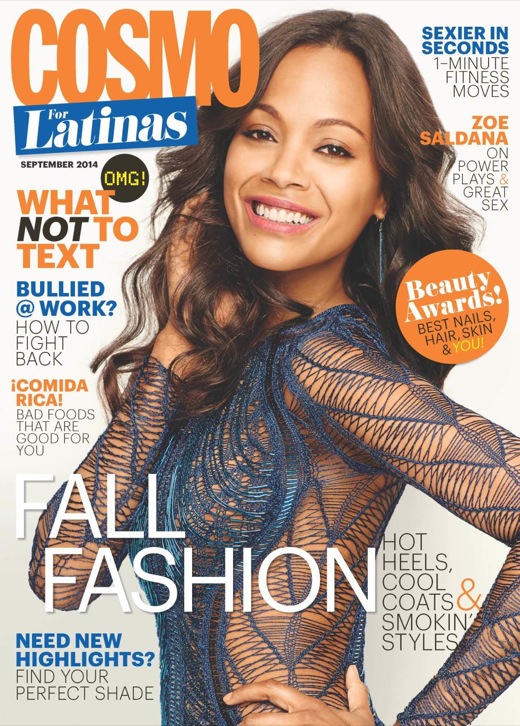 Appearing on the cover of Cosmopolitan for Latinas‘ September issue, Zoe Saldana opens up about teaching her future children multiple languages, her career and more.

The pregnant Guardians of the Galaxy actress insists she wants her future bundle of joy with husband Marco Perego to learn an array of languages.

“Of course [our children] will speak the languages that we speak; my sisters and I grew up learning French and speaking English and Spanish, and because of that, we’re able to understand Italian and Portuguese. But I’m going to have to make a conscious effort to speak Spanish to my children, because I speak Spanglish,” she told.

Zoe who lived in the D.R. from ages 10 to 17 says she has always identified with her Latina heritage.

“Super identified. Spanish was my first language. Then you go to school, and within a month you’re completely an English baby. So that’s the battle you’re always having: It’s English out there and Spanish in the house. I don’t say “mommy,” I say “mami.”,” she said.

The Star Trek Into Darkness actress says it’s possible for her to live a normal life despite being famous.

“An actress is like a stock,” she explains. “When you’re in high demand because you have three movies coming out or you’ve gone through a breakup, you’ll look outside your window and see photographers. But you can also live a very anonymous life if you choose.”

Katie Holmes Tries to Give Suri a Normal Life