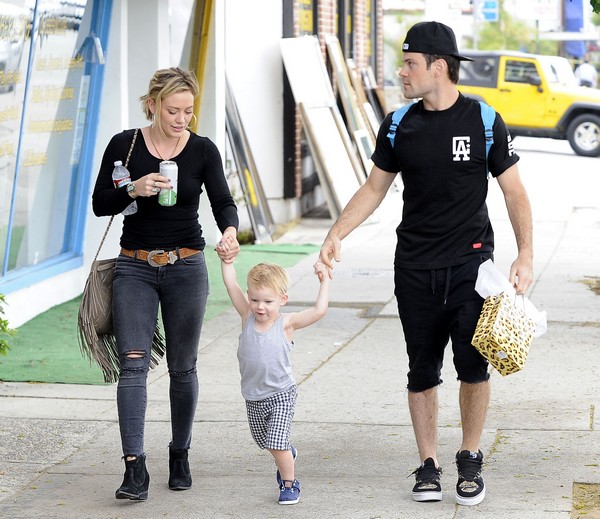 Former Disney star Hilary Duff her estranged husband professional hockey player, Mike Comrie and their adorable 2-year-old Luca headed to a birthday party in Sherman Oaks, California today, July 19, 2014.  Although the couple separated in January they are still extremely close and spend a lot of time with their son.

The 26-year old actress/singer showed off her svelte figure in a rocker sheik ensemble wearing black torn jeans, black t-shirt and black ankle boots.  She accessorized it all with a fringe purse and hoop earrings.  While Mommy Hilary looked like a rockstar, Mike and Luca decided to go for a more casual look.

Hilary is scheduled to release her long-awaited new single next week.  As a matter of fact she will be debuting her single in NYC.   Hilary tweeted and confirmed, “Ooooh Yaaas Very excited to see everyone @MarqueeNY this coming Thursday!! Should be a good week mmmmhhhmmmm.”  Ed Sheeran collaborated on the new album and this is the first single released.

What do you think CBLers, are you excited to hear Hilary’s new single and new sound?  Hit the comments and let us know your thoughts!