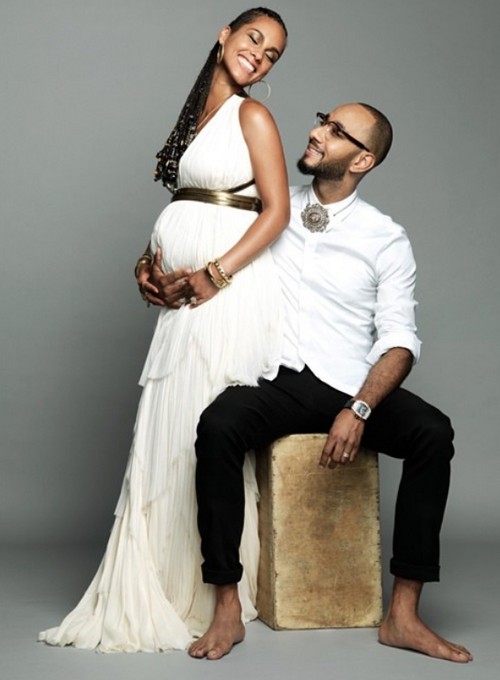 Remember a few months back it was rumored that Alicia Keys and her husband Swizz Beatz were expecting another baby but no confirmation occurred?  Well Alicia herself confirmed it now, complete with a precious photo of the couple and her burgeoning bump on Instagram. Alicia went on to caption the professionally taken shot, saying,

“Happy Anniversary to the love of my life @therealswizzz !! And to make it even sweeter we’ve been blessed with another angel on the way!! You make me happier than I have ever known! Here’s to many many more years of the best parts of life!”

Alicia and Swizz are already parents to an adorable three-year old son named Egypt. From her regular social media postings it’s obvious that motherhood totally agrees with the songstress and she herself has talked about the peace that has come from seeing the world through her sons’ eyes.  Having another baby doesn’t mean that Alicia has any intention of slowing down though. This fall she will be taking her spot on The Voice as a mentor for Pharrell William’s team of hopefuls.

With all of the recent breakups and the rash of band aid baby’s it’s really nice to hear about a happily married couple expecting another bundle in Hollywood, isn’t it? The focus has been on Beyonce and Jay Z for years but perhaps the true couple of R&B/hip hop is actually Alicia and Swizz! Perhaps they are uietly living their lives and are simply the real deal. Are you looking forward to seeing Alicia on television this fall? Tell us your thoughts in the comments below!

Water Sport Fun With Kids: 10 Cool Things Kids Can Do with Pool Noodles

Back to School Preparation: Tips For Parents – Getting Your Children Ready For A Good Start