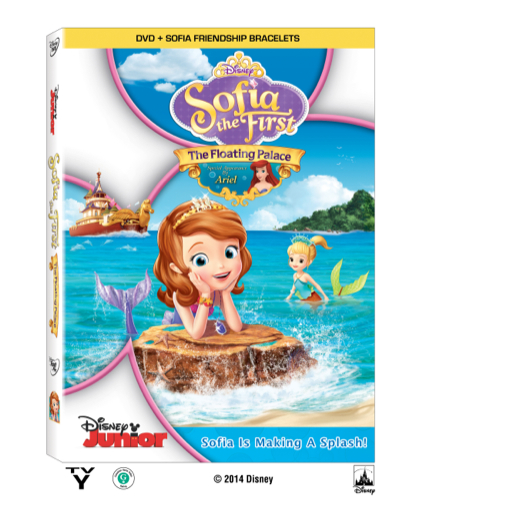 Let your child set sail on a magical full-length adventure under the sea with Sofia the First: The Floating Palace.

Voiced by Modern Family‘s, Ariel Winter, Sofia is Disney’s first little girl princess. In the series, Sofia becomes a princess after her mother marries Roland II of the kingdom of Enchancia and must learn how to be be a princess and adjust to royal life.  She also has a magical Amulet that grants her the ability to talk to and understand animals.

The Floating Palace episode of the Disney Junior hit show first aired in November and became the #2 telecast in cable TV history in Kids 2-5 and Girls 2-5. To say the least, I’m not surprised because my 2½-year-old daughter loves following the adventures of Sofia.

After Sofia helps a young mermaid named Oona, Sofia’s amulet grants her the power to transform into a mermaid and visit her new friend’s secret underwater kingdom. But when Cedric (disguised as a sea monster) plots to steal Oona’s enchanted Mermaid Comb, danger surfaces for both worlds. With a little help from special guest, Princess Ariel, Sofia embarks on an adventure to rescue Oona. Overflowing with oceans of song-filled fun – plus three more exciting episodes – Sofia the First: The Floating Palace proves that when families and friends work together, they can weather any storm and save the day!

What makes this special so good is that Sofia gets to become a mermaid for a day. She gets to see another world that is very different from hers, but similar at the same time. Oona complements Sofia and she also has a special enchanted item – a mermaid comb.

My daughter loves Ariel from the Little Mermaid, so this special was double the fun for her. Coincidentally, Ariel was my favorite Disney princess as a kid, so I was excited to see her come to life again. I enjoyed that her personality was similar and her look was comparable to the 90’s Ariel.

Sofia the First: The Floating Palace is now available for purchase on Amazon

and at your local retailer.

Ginnifer Goodwin: Feeling My Baby Move Is Like Alien Stuff