The Jolie-Pitt’s Are Back in Los Angeles 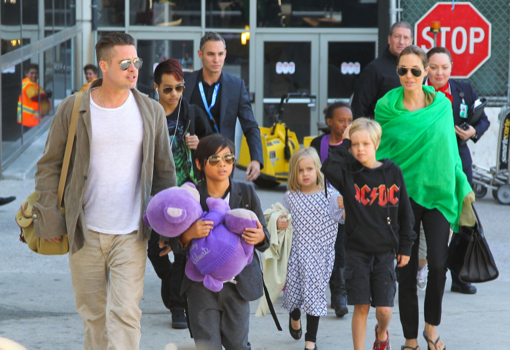 Brad Pitt and Angelina Jolie were photographed arriving on a flight with their six children at LAX Airport in Los Angeles on Wednesday (Feb 5).

The 12 Years a Slave actor led the way next to Pax who was carrying a big purple bear. Shiloh followed shortly behind while Jolie held Vivienne’s hand. Zahara held Knox’s hand as Maddox listened to music.

They were returning from a 3-month stay in Australia, where Jolie directed her upcoming film entitled, Unbroken.

On their last night down under, Pitt and Jolie were photographed walking hand-in-hand into the Shipwrecked Seafood Bar & Grill for the film’s wrap party.

The couple are expected to attend Oscars on March 2nd.