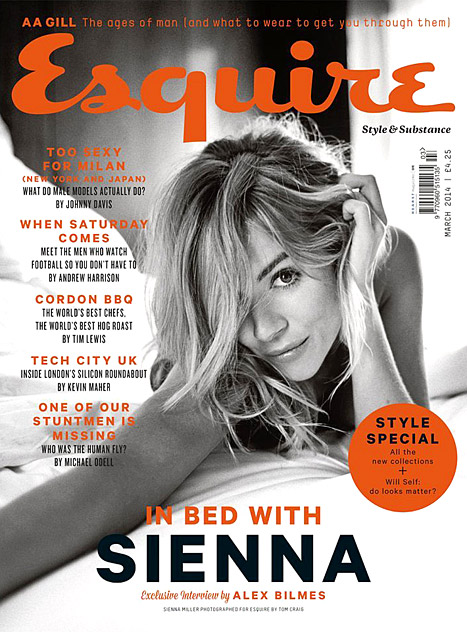 Covering the March issue of Esquire UK, Sienna Miller open up about past mistakes she made as a young actress and her new life with fiancé Tom Sturridge and their 18-month-old daughter Marlowe.

The actress insists having a child has given her a lot of perspective and she couldn’t be happier.

“I feel really settled. I have a wonderful life. I’m up every morning with a little baby. That gives you incredible perspective. It’s such a gift. And it’s grounding in a way you can’t describe,” she told the mag.

”He’s the antithesis of me, really. And that’s a first for me, to be in a relationship with someone who’s in a lot of respects very different. He’s the perfect balance to my lunacy, which makes him sound really boring, but he’s not, at all. It’s good, it works. It’s not easy, of course, but we’re a family and I love that. I wake up and I’m like, ‘I’m a family, I’m a grown up!’ I still can’t believe it,” she adds.

However, things weren’t always so great for the actress. After a highly publicized affair with Balthazar Getty (father of four) and her whirlwind romance with actor Jude Law, Miller’s career took a nosedive.

“It had become difficult for me to get the work I wanted, if I’m really honest. It was a weird situation to be in because there was a lot of goodwill for me in Hollywood. I think I’d been lucky in that I’d always been naughty in that town and people had always liked me for it. And it was refreshing and it was who I was. I was English. I was, ‘Let’s be who we are! I’m not going to have my hair done every morning and yes: I smell of fags!’ And so I would walk into studio heads’ offices and we’d crack up laughing,” she told.

To read the full interview pick up Esquire UK this month.