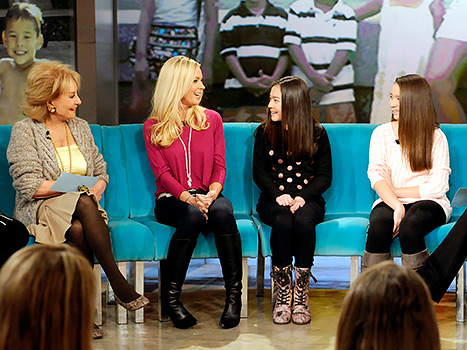 Kate Gosselin‘s twins, Cara and Mady, have been in the spotlight for the past week for what many media outlets and people have deemed a very awkward interview given on NBC’s The Today Show. The mother will certainly be much more pleased with their performance on Monday Jan. 20th’s episode of The View where, quoting a popular celebrity news magazine, it was deemed that “they speak!” in a supercilious mocking reference to their “silent” performance last week. I guess the fact that they happen to be 13-year-olds and might not be the most comfortable people in front of tv cameras might be getting lost on some people here here. Their interview, however, seemed quite pleasant for the most part.

“What kind of stuff do you do around the house to help your mom?” Sherri Shepherd asked the twins. “I don’t really do chores… so Cara?” smiled Mady. “Okay, well, I unload the dishes,” said Cara. “Mady loads the dishwasher, she does do some work,” she added. “What do you guys like to do?” inquired Whoopi Goldberg. “Tell me — don’t look at her — pretend she’s not here,” said the comedian while gesturing towards their mother. “If I’m going to be 100 percent honest, I don’t like Justin Bieber,” Mady replied. “But I… One Direction,” she said, implying her love for the mega successful boy band.

The interview then turned to more serious questions such as life for the twins with sextuplets siblings, and questions about their parents’ divorce in 2009. The latter was provided a convenient response which actually showed Mady’s maturity:

“Honestly, it wasn’t hard for us,” said Mady. “I think it was harder for you, definitely” she added, turning towards her mom. “It didn’t really affect me and we still saw both parents… we were little, we were like 8 or 9.” She went on to add, “We knew what was going on, but we didn’t see the stuff…”

The awkward part came when the twins were asked if they still their dad, Jon Gosselin, which prompted the two 13-year-olds to look towards their mom as if unsure what to say, or if they would be rebuked if provided with the wrong answer. Therefore, they took a page from last week’s NBC interview and chose to remain silent, even though Kate tried to urge Mady to respond.