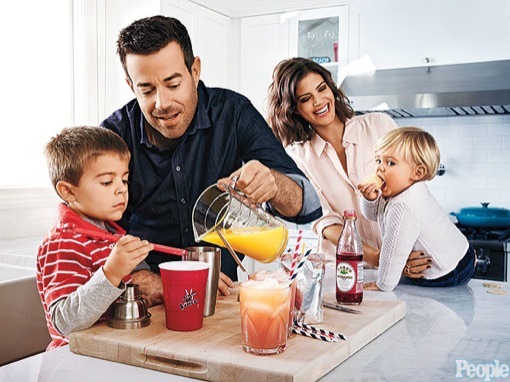 Whoever follows the life of Carson Daly might not know it, or even feel it possible, but the man is first and foremost a family. Yes he hosts Last Call With Carson Daly, his own radio show as well as NBC’s hit reality sing-off show The Voice but at the end of the day nothing comes ahead of his lovely family of 4 (including himself).

“After this many years, I know who I am. My life is not television,” Daly affirms to a magazine. “I’m a family man first and foremost. Everything I do in this business, it all pays off when I come home.”

“Our family time is like happy hour,” adds the host. “Siri and Etta are cooking and I’m making kiddie cocktails with Jack — that’s our thing.”

The Daly family is comprised of Carson himself, his fiancée since last June Siri Pinter, as well as son Jackson James, 4-and-a-half, and daughter Etta Jones, 16-months-old. Daly was absolutely taken aback by Siri while the food blogger was working as a writer’s assistant on Daly’s Last Call:

“She would walk into our meetings and I would look at the other dudes in the room, like, ‘Do you see what I see?’ It was undeniable” said the host.

“Our lives have been crazy,” added Daly. “We’ll get married when we have time. The husband and wife thing is just the bow around something. Our end game is we want to be together forever.” He went on to address the next topic in logical order, i.e. the future possibility of more children:  “We want more — as many healthy kids as God blesses us with,” though the window of opportunity won’t forever be opened for the reality tv personnality.

The proud parents have been together since 2007.