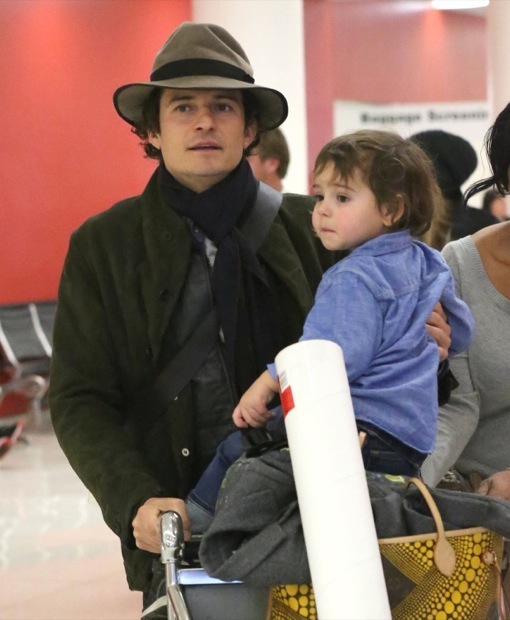 Orlando Bloom and his son Flynn were pictured arriving on a flight from New York City at LAX airport in Los Angeles, CA on Thursday (Jan. 9).

The Hobbit actor wore a fedora hat, a large jacket, scarf and jeans while making his way through the terminal. He pushed the toddler in a baggage cart.

Kerr shared an Instagram photo of Flynn’s B-day cake which read “Happy Birthday Flynn” with three candles on it.

The two announced their split in October.

“It’s difficult for anyone to go through a separation, whether it’s on a public scale or not. It was important for us long-term to preserve our friendship and the dynamic of being loving parents to Flynn so we dealt with everything openly and honestly,” she said in an interview with Harper’s Bazaar Australia.“Flynn is the most important thing in both our lives. And because we share that bond, we both feel it’s important to be united. We respect each other and with respect comes understanding. When there’s understanding, I guess everything is a little more harmonious. We’re still very big parts of each other’s lives. There’s no reason for us to be anything but a united front. We still love and care for each other deeply.”