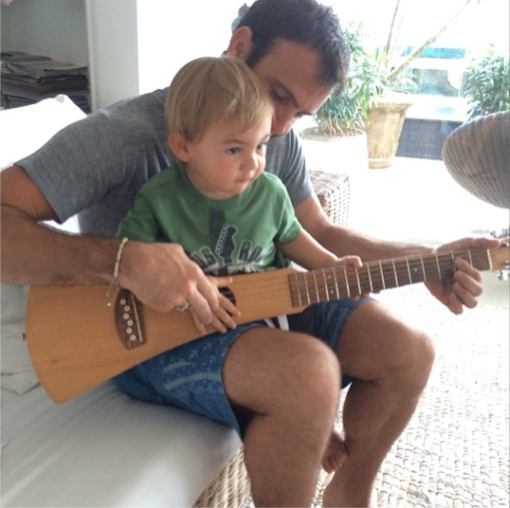 Alesasndra Ambrosio‘s fiance Jaime Mazur took to his Instagram to share a sweet shot of their 1-year-old son Noah Phoenix.

“Why Not’, the proud dad captioned the photo in which he is teaching the Paul Frank wearing tot to play a musical string instrument.

Meanwhile, Ambrosio recently admitted she had to work extremely hard to get back in shape after her pregnancies.

“People kept telling me that I would bounce back straight away, but a week after giving birth I still had that balloon belly.” the Brazilian model told Net-A-Porter’s The Edit magazine of her two pregnancies. “It was the first time in my life that I had to diet. Before I had my kids, if I gained one or two pounds I would just eat salad and it would be OK. But when I got pregnant with Anja I really went for it with food. I gained 60lbs, so I had a lot to lose.”

The couple who are also parents to 5-year-old Anja are currently vacationing in Brazil.

Kelly Clarkson is Having a Girl