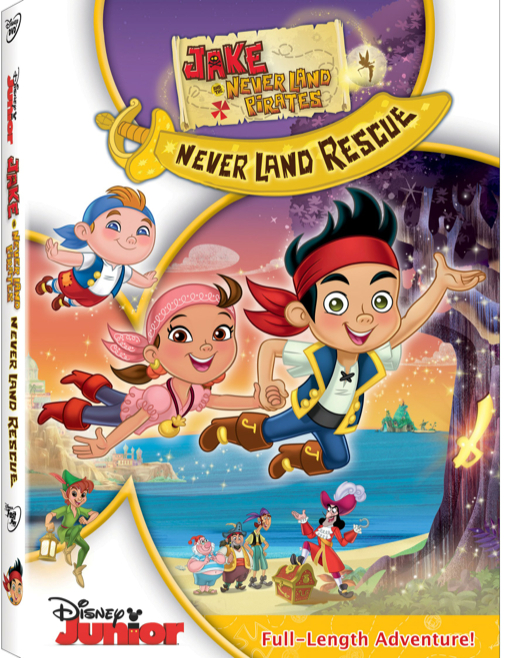 In Jake and the Never Land Pirates: Never Land Rescue, Jake embarks on his most heroic mission ever as the magic of Never Land begins to disappear just as the ancient Forever Tree seems to be fading away.  After a mysterious figure known as “The Guardian” arrives to explain that only the pirate who truly believes in himself can save Never Land from vanishing completely, Jake must break off from the rest of his crew and go alone on a mission to save the Forever Tree, the source of magic throughout all of Never Land.  Guiding Jake on his quest is Tinker Bell, who makes her first-ever appearance in the series.

This full-length adventure was one of my daughter, Ava’s, favorites. As usual, the adventure was fun and the songs entertained her while teaching a valuable message. The addition of Tinker bell into the Disney Junior series for the first time was exciting.

Ava also loved the Jake Sword with Glow-in the-Dark Stickers packed inside.  So, the fun even continued after the DVD was finished.

The DVD includes four other Jack and the Never Land Pirates episodes:

“It’s a Pirate Picnic”/ “The Key to Skull Rock”

“The Golden Twilight Treasure”/“Rock The Croc!”

Disclaimer: Celeb Baby Laundry has not received any payment as a result of this review. We were sent the product for the purposes of review.  All products featured must meet Celeb Baby Laundry’s standards. All opinions are our own.

Mike Comrie Bonds With Luca at the Park