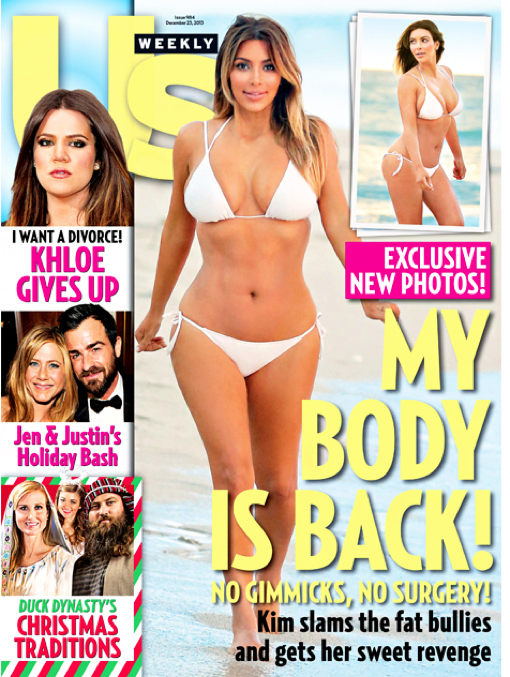 If you’ve lived as a worm for the past 6 months then you might have missed all the cyberbullying that poor Kim Kardashian has had to go through. The reality tv superstar has all kinds of people irrationally set against her for a variety of different reasons, and in a variety of different ways. But the most common sort of abuse, or bullying, that she seems to be the victim of is all those nasty messages she keeps getting which mainly pertain to her weight or her intellect, or both. Those scathing remarks have had a profound impact on the forefront member of the Kardashian Klan but Kim K didn’t let any of that bring her down.

She didn’t stop to loathe in the self-pit or to bathe in the negativity when it would have been the most logical to do, no way. She plowed on right through and it is with great pride that she shows of her incredible post-pregnancy body in this week’s version of US Magazine, a mere 6 months after giving birth to baby North West. It’s another middle finger of sorts to her vast base of scornful haters, that vile bunch who just don’t get it. Wearing but a skimpy white bikini, Kim is looking gorgeous sporting that beautiful smile. Doesn’t she look happy? But don’t let image of the beautiful final product deceive, Kim has supposedly adhered to a very strict and rigorous diet scheduel. She’s been working hard at getting in this tip top shape, because she does look like she’s in amazing shape.

Just recently, Kanye West called Kim Kardashian the most beautiful woman in the world, or at least top 10 in history! The rapper is madly infatuated with his Armenian princess and he’s been fight tooth and nail to show the world just the kind of special person she really is. If only we could see what he’s seeing. When I say we I mean the haters, of course, not necessarily we over here, but you know that.

So what do you think? Does Kim Kardashian look great in her debut of her post-baby body? Or have we seen all of this before? Is Kim Kardashian shutting up the haters? Let us know!

Rachel Zoe is Ready to Pop