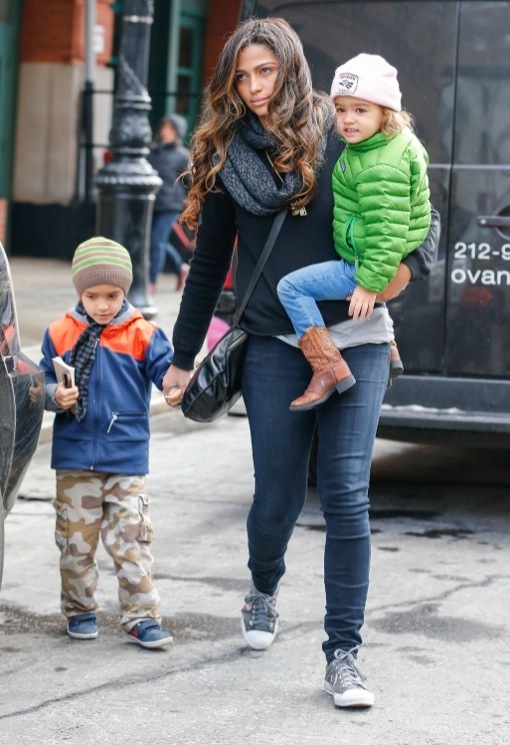 Camila Alves was spotted leaving her hotel in New York City with her kids on December 18. Sporting a pretty casual tire, including faded jeans and sneaks, the Brazilian model is hugging her daughter Vida, 3, in her left arm while her she’s holding onto her son Levi, 5, with her other hand. Absent in the shot are son Livingston, 1, and hubby and father to all three kids, Matthew McConaughey.

Alves was signed to Macy’s I.N.C. International Concepts in 2012 as the new face for the division of the popular American retailer. Although she is Brazilian, the model has been living and breathing USA for over 10 years. She met McConaughey in 2006 and the couple have been together ever since. They engaged in December 2011, and were married in June 2012 in Austin, the capital of the Lone Star State.

They also reside there currently, though Alves‘ modeling career will see her in NYC every now and then. She must also keep herself busy as her hubby is busy busy being at the peak of his career popping out acclaimed success after acclaimed success in recent years. Bud, the tragic southern romance about a relationship that was doomed to an unbecoming conclusion was a major hit for a seemingly lower budget movie. And of course, Dallas Buyers Club is as hyped as they get. So again, Alves needs to make sure she has enough curriculars and extra-curriculars  on her menu to keep sane during this very important phase of her Texan hubby’s professional life.

Reese Witherspoon is all Smiles With Tennessee