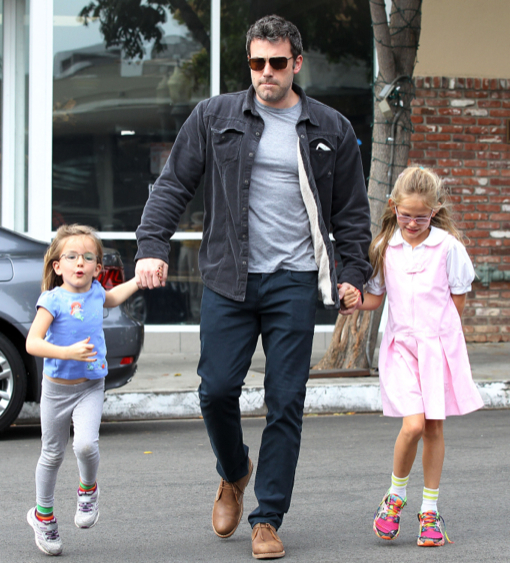 Crazy stalkers harassing their beloved favorite celebrity is a pretty common occurrence in today’s Hollywoodland. Crazy stalkers threatening to kill an actor and his entire family? I’m sure there’s been a few cases, but the harassment usually takes its course in the form of infatuation rather than pure, naked anger. Ben Affleck clarified the details regarding what seems to be a pretty scary and potentially discussion-inducing incident that put his daughters, 8-year-old Violet Anne and 4-year-old Seraphina Rose Elizabeth, right in the middle of the controversy.

What exactly did this crazy berserker do that startled Affleck to lash out with so much passion in Playboy Magazine? Well, he supposedly went to his daughters’ school, infiltrated the hordes of paparazzi to camouflage himself as one of them and got that close to his children:

“He was in the pack of paparazzi. They didn’t know he was a guy who was threatening to murder our family. That makes me angry. It’s a safety thing, and there’s also a sanity thing.” said a fired up Affleck to which he added; “My kids aren’t celebrities. They never made that bargain. We were offered a lot of money to sell pictures of our kids when they were born. You’ll notice there aren’t any. I make no judgment about people who decide differently…but for me it was a matter of principle.”

The one thing I don’t understand is that if this crazybin had threatened to murder his family previously why was this guy out walking in public at all? That just seems all sorts of messed up. Affleck should seriously try to get the legal system to do something about this kind of thing in the future because I’m not sure that the paparazzi’s job is to be on the lookout for potential stalkers and murderers – though maybe they should if they know what’s good for them. And the school teachers and staff? I’m not quite sure that they can keep a lookout for these things as well, especially if a guy is camouflaged. And should it even be their job?

In this case there seems to be a good ending as the stalker was in the end arrested but Affleck still thinks that this whole situation is absolutely unacceptable.

“It’s wrong and disgusting to follow children around and take their picture and sell it for money. It makes the kids less safe,” he affirmed. “They used to take pictures of our children coming out of preschool, and so this stalker who had threatened to kill me, my wife and our kids showed up at the school and got arrested…there are real practical dangers to this.”

Real practical dangers there are, it seems like you can’t trust anyone to protect your family these days. The only problem is that you need to, I mean Affleck can’t be patrolling his daughters’ school on the lookout for potential stalkers 8 hours a day 5 days a week. He has a busy Academy Award winning career calling. But that doesn’t matter, as those kids could be anyone’s and children protection should always be of the utmost importance no matter what. Affleck echoed this when he made his point about the differences the effects of hackling and overall intrusive behavior the paparazzi have on children and adults.

“As their father it’s my job to protect them from that stuff. I try my very best, and sometimes I’m successful. The tragic thing is, people who see pictures naturally think it’s sweet. They don’t see the gigantic former gang member with a huge lens standing over a four-year-old and screaming to get the kid’s attention,” Affleck expounded. “The kids are always looking down because they’re freaked out and scared of these people. And so they yell. Which is fine if you’re Lindsay Lohan coming out of a club, or me or any adult. With kids it’s tasteless at best.”

I thought it was pretty telling that although he included himself in that last sentence by sheer reconsideration, he kind of singled out Lindsay Lohan and, indirectly, her kind as reasons for the growing problem of paparazzi aggression. If every Hollywood celebrity lived the married life like he does than all of the tabloid hoopla would dwindle and eventually die out.

What do you think about this whole mess? The question here is should children be “off-base”? Should there be serious legal repercussions for Children of celebs? Or are they fair game, after all their parents are apart of the rich and famous so anything goes? Let us know your thoughts below.