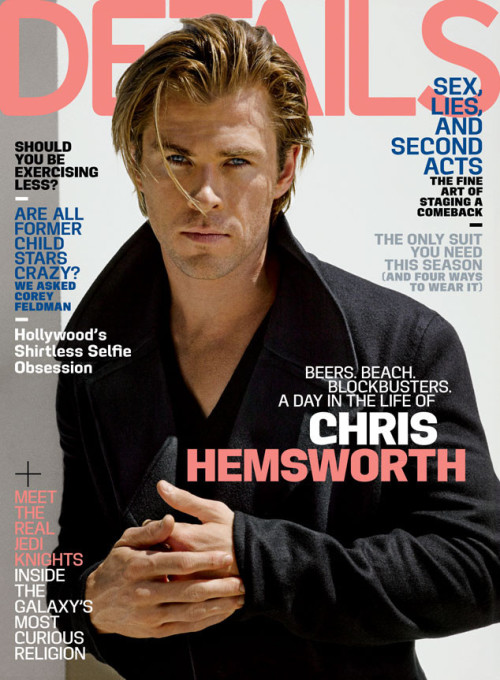 Yummy daddy, Chris Hemsworth covers the November 2013 issue of DETAILS magazine’s while opening up his successful career and feeling like he needs to slow down to spend more time with his wife Elsa Pataky and their 1-year-old daughter India Rose.

“I’ve been working solidly for a couple of years now, to the point where I have to slow down and spend some time with my family. You spend so long having your hand up, saying, ‘C’mon, c’mon – pick me!’ there’s a fear of saying no to things. It’s bred into you. I get s*** sent to me and I think, ‘I should probably just take this.’ But now I try to say, ‘Hold on – do you even like it?’ I do have a little control now. That’s the transition – I’m not at the mercy of someone else so much,” he confided.

The Rush actor insists he loves his career, but he does get fed up of always having thinking of himself and analyze how he feels.

“I’ve worked my a** off over the years, but I can’t help but see that, relatively speaking, it all has been rather quick. No other job forces you to think about yourself this much. That’s a scary thing, because before you know it, it’s all pointed inward. You’re taught to think, ‘Okay, what do I want out of this scene? How am I feeling here?’ Then it’s like, ‘Awww, f*** off, I.’ You start to hate ‘I.’,” he tells.