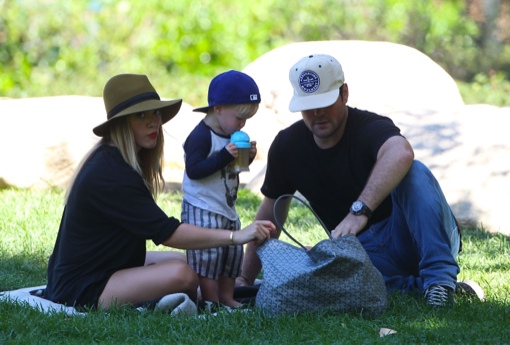 Hilary Duff enjoyed a day with her husband Mike Comrie and their son Luca at Coldwater Park in Beverly Hills, CA  on Tuesday (Aug. 27).

Duff took pictures of the father-son duo swinging together before heading over to playset. The 1-year-old also enjoyed playing the sand and chasing a blow-up beach ball.

At one point, the paparazzi got to close for the protective parents liking and they were quickly told to keep their distance.

Duff recently admits that juggling motherhood and career are not easy.

“I’m chasing a baby around all the time. It’s pretty busy,” Duff said before revealing her studio plans. “I’m going to focus on my music. It’s been a long time coming. I think I’m finally buckling down and getting in the studio,” Duff revealed to Ryan Seacrest.

Shannyn Sossamon: Day Out With Mortimer In Vancouver