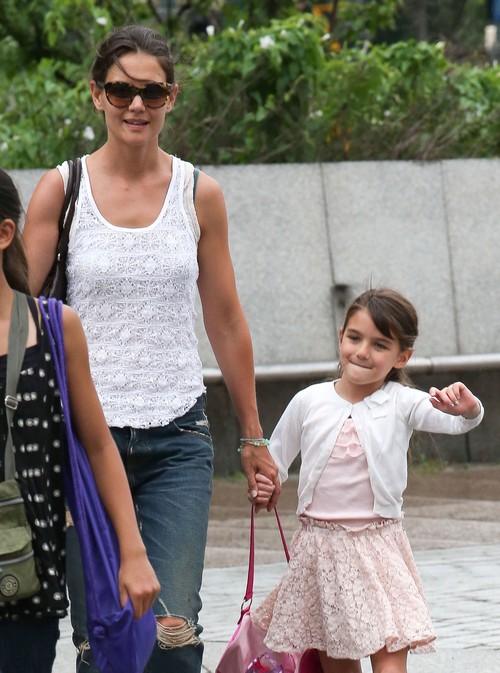 Seven-year-old Suri Cruise and her mother Katie Holmes took a stroll after Suri’s gymnastics class at Chelsea Piers in New York City, New York on July 12, 2013.  Mom Katie was dressed casually in jeans and a white summer tank top.  While Katie whose father is Tom Cruise looked adorable in a pink skirt, pink tee shirt, topped off with a white cardigan and pink flowered flip-flops.  Suri was carrying her pink gym bag with her and looked very happy as she skipped around.

Suri definitely looks happier than she did the other day when a bunch of fans and photographers tried to take her and her Moms pick and Suri yelled, “Stop it!  Get out of the way!”  One autograph seeker was not pleased with what she said and commented, “Bye, Suri, you little brat.  She’s a b**ch…a little brat kid. A little brat.”  No matter what Suri said the man was totally out of line saying that.  Thank Goodness Suri and Katie were already in the car so they missed the comments.

Once the video was released of the incident with Suri people were outraged.  Suri is only a little girl and she was fed up with the constant barrage of photographers.  If we had cameras shoved in our face every time we left the house we may have reacted exactly the same way.  Shame on that man!

Enjoy the photos of Katie and Suri!