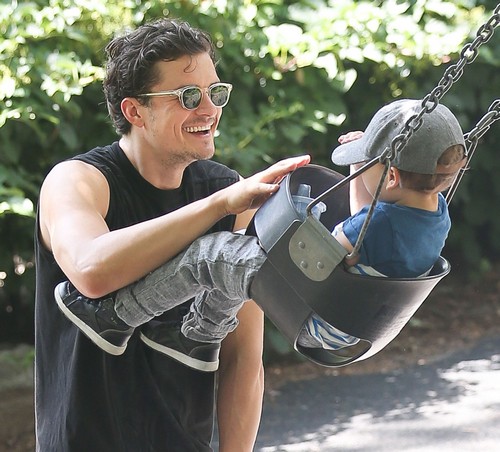 Orlando Bloom and his two-year-old son Flynn enjoyed a Daddy/Son day in Central Park in New York City on July 6, 2013.  Daddy Orlando pushed Flynn on the swing while he smiled and laughed.  Once they were finished at the Park Orlando carried Flynn home in his arms.  The Lord Of The Rings star was casually dressed in jeans and a muscle shirt, ready to relax.

Orlando’s wife and Flynn’s mommy Miranda Kerr was no where to be seen as the boys had a great time.  On July 4th the family spent July 4th together.  The couple are rarely spotted together and the last event they attended together was the Vanity Fair Oscars party earlier this year.

Although Flynn is two-years-old when Miranda was recently asked if her and Orlando were planning on having more children, she replied, “Someday, not right now.”

The family is back together because Orlando is finally finished filming The Hobbit trilogy.  The Hobbit: The Desolation of Smaug will be hitting theaters December 2013.  Peter Jackson posted a video on Facebook of Bloom spoofing his Legolas character in a cheeky musical number.  It’s cute, check it out below!