Fergie and Josh Duhamel Having A Baby Boy – Confirmed (VIDEO) 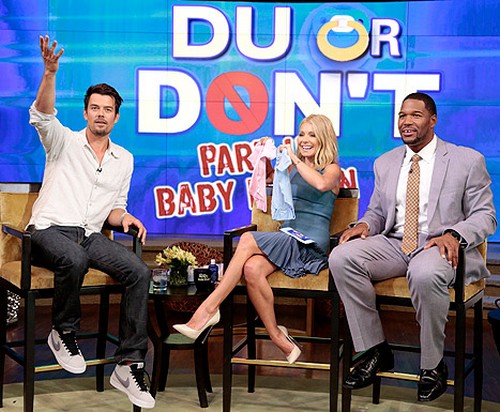 It’s a Boy! No, not the royal baby. It’s a boy for Josh Duhamel and his wife Fergie. Josh announced it today on “Live with Kelly and Michael” by holding up a blue onsie.

Their son won’t be around until late August/early September but the happy couple have already begun to lay out plans. It was just last week that Fergie applied to legally change her name from Stacy Ann Ferguson to Fergie Duhamel.  I guess they didn’t want their son to have parents with last names. Unlike pretty much the rest of Hollywood.

The two have been married since 2009 and are finally starting their family. Josh has always said he wanted kids right away but it was rumored Fergie wanted to wait when she was less busy with her solo career and Black Eyed Peas commitments. Like waiting would become easier for Josh as he already a woman past 35.  Either way she did end up caving and luckily, for her, was able to conceive. But  the excitement Josh is showing is proof this should have been done years ago.

“I can’t imagine having a kid and then not being able to be there — that would just drive me crazy. My head would be at home with mom and baby,”– Josh during an interview.