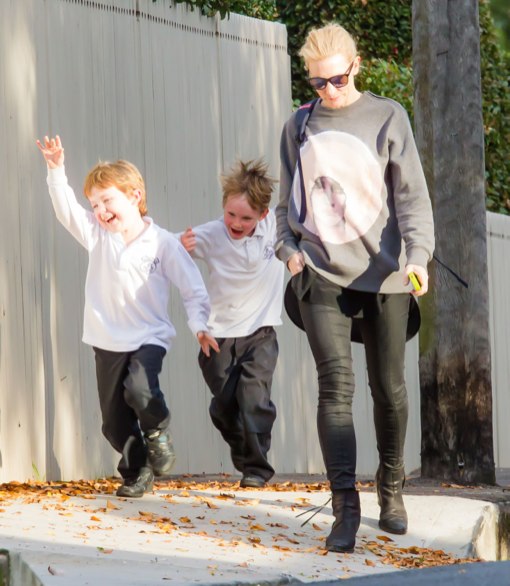 Cate Blanchett picked up her sons Roman and Ignatius Upton from a private school in Sydney, Australia on Tuesday (June 11).

The Hobbit actress looked chic in a grey sweater with a funky face printed on the front and black leggings while she calmly walked. The two brother were anything, but calm as they skipped and cheered walking home.

Cate is currently staring alongside French film icon, Isabelle Huppert in The Maids with the Sydney Theatre Company.  The pair  play homicidal houseservants Claire and Solange in the production that is directed by Benedict Andrews.

The story isloosely inspired by France’s notorious Papin affair, in which two maids — who were rumored to be incestuous lesbian lovers — killed their employer’s wife and daughter in 1933.

So far, the show has received favourable reviews.

Cate Blanchett: Why We Chose to Adopt

Cate Blanchett Jets Off With Ignatius