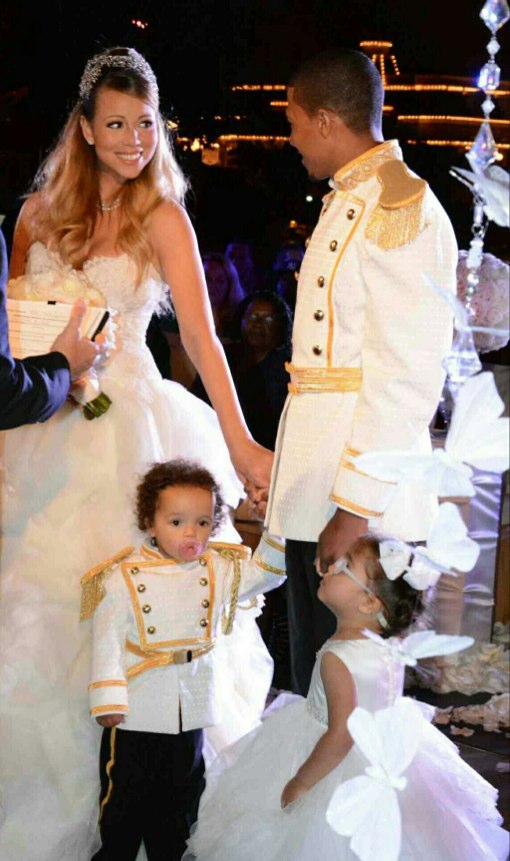 Mariah Carey and Nick Canon renewed their wedding vows in a royal way!

The couple celebrated their 5th anniversary by renewing their vows at the Happiest Place on Earth, California’s Disneyland, on Tuesday night (April 30).

Carey and daughter Monroe who were both dressed as princesses were picked up in a horse-drawn Crystal Carriage from a Dream Suite inside the Pirates of the Caribbean attraction, then taken to Main Street to meet their princes Cannon and Moroccan.

The twins sat in the front row to witness the vow renewals which were themed, “Do you believe in fairy tales?”. After the ceremony, fireworks sprang out in celebration.

The ceremony was followed by a reception in Fantasyland. Approximately 250 guests enjoyed a champagne toast  in a space that was adorned with 15,000 blooms imported from South Africa, Holland and France and 10,000 crystals.

Earlier in the day, Moroccan and Monroe celebrated their 2nd birthday with 150 guests in the newly opened Fantasy Faire section of the park. Disney princess characters as well as Mickey and Minnie Mouse celebrated with the children.

To find out more details of Mariah and Nick’s celebration, head over to Allie is Wired who has the scoop, CLICK HERE!

Khloe Kardashian: I’ll Have to Take Hormones To Have a Baby”