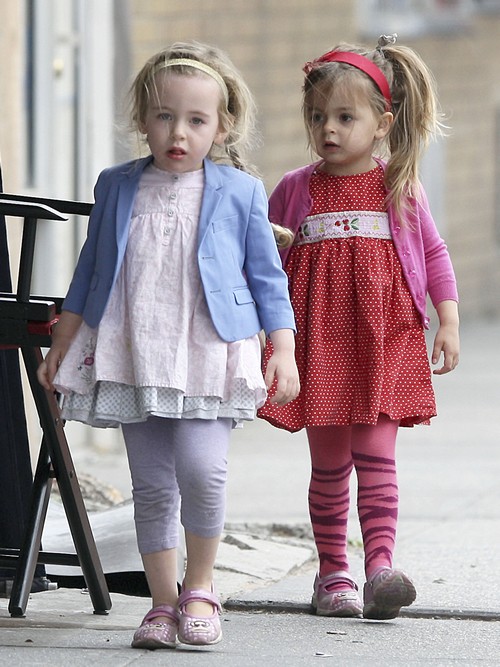 “Sex and the City” star Sarah Jessica Parker took her three-year-old daughters Marion and Tabitha to school on April 18, 2013 in New York City.  The two already are fashionistas and have made it clear to their mother they want no fashion advice.

The Broderick twins were dressed in Blue and Pink dresses and they were dressed perfectly for the beautiful NYC Spring Day.  Their big brother James Wilkie Broderick was no where to be seen.

Sarah told People Magazine, “They pick out their own clothes every single day.  They won’t listen. I just provide the clothing and a lot of those dresses they wear are from my childhood or my niece’s young childhood.”

Sarah also revealed that the twins also like jewellery and she often has to try to find where she puts her jewels, “they have walked away with many pieces.”   But, Sarah did add that they don’t take anything really valuable, “Nothing of enormous value and I’ve told them basically all of it’s theirs with some set aside for my son.”

Jenna Dewan-Tatum Does Pregnancy Yoga As Due Date Nears