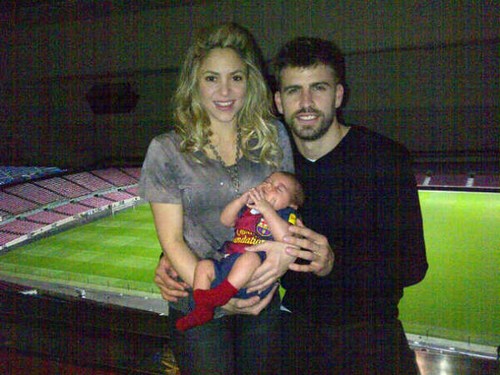 You know how the old saying goes, like father like son. It looks like 7 week old Milan Pique will be emulating his daddy, Gerard Pique,  from the get-go. Shakira delivered her first born on January 22nd and immediately declared the baby boy to be boyfriend Gerard’s biggest fan. On Weds. The couple shared a photo of Milan decked out in an itty bitty team jersey and socks with the soccer field that his father had just won on as the back drop. Pique had just helped his team to secure a Champions League quarter final spot. According to US Weekly, he said of the game, “We believed from the first minute. We played a great game. To score early helped a lot and the atmosphere was amazing.”

When Milan was first born Shakira had issued a statement that included her hopes that her son would follow in his fathers footsteps. Not that Shakira’s career is sitting on a back burner either. Beginning on March 25 viewers will see a then-pregnant Shakira take a mentoring spot on the hit show, The Voice.  She is taking over for Christina Aguilera that opted to take a breather from the show to do her own thing for awhile. Shakira comes to the NBC show with her claws out, ready to compete to help find the most talented new singer in the U.S.

Will you be tuning in to see how Shakira does on this season of The Voice?  How about her relationship with Gerard? We don’t hear a whole lot about the two of them, do you think they’ll eventually make it official and get hitched? Tell us your thoughts in the comments below!

Hilary Duff Takes Her Little Boy To The Doctor’s Office