Jessica Simpson: “I’m Having a Boy!” 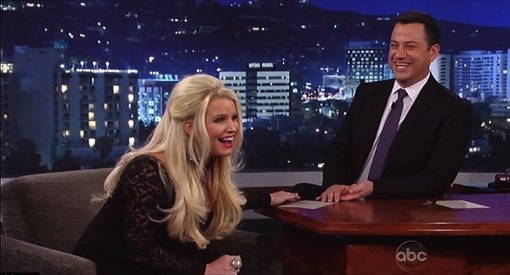 While chatting about the morning sickness that’s accompanied her second pregnancy the Fashion Star mentor let it slip while making a and off-color joke.

“The crazy thing is I never knew a wiener could make me nauseous,” Simpson quipped.

“Well, I guess I just told the world that I’m having a boy!”

“I can’t believe I just did that, that was not planned,” Simpson insisted of the gaffe. “I just did it so crude, I feel awful!”

Simpson also made fun of getting pregnant again so early after the birth of her daughter Maxwell. She joked that she should restrain from sex till she marries fiance, Eric Johnson.

“Maybe I should go back to when I was younger,” she mused. “I was a virgin before I was married [to Nick Lachey], so maybe I should just completely reverse and just stop having sex all together until Eric and I actually say ‘I do.'”