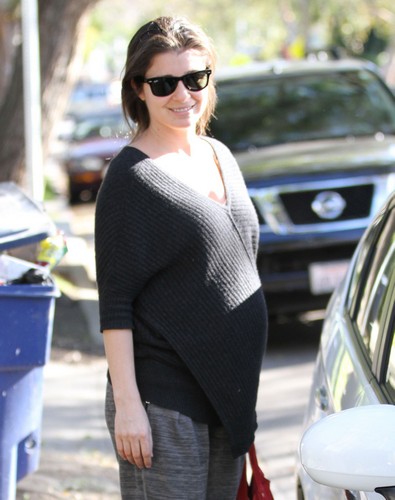 “Girls” and “Chicago Fire” Actress Shiri Appleby and her fiance Chef Jon Shook welcomed their new daughter March 23, 2013 in Los Angeles.  In December 2012, Appleby and Shook announced that they were expecting their first child in early 2013 and did not reveal the sex of the baby.  “It’s really made the whole pregnancy a heightened excitement because you just don’t know what it’s going to be.”

Shiri told US Magazine about her new daughter, “She’s heaven.  I’m beyond thrilled.”

Shiri has said the Jon who proposed during a trip to Ventotene, Italy had been extremely supportive and calming during her pregnancy.  “When you see this guy going to all the doctor’s appointments with you, and you tell him you’re feeling a certain way, and two minutes later he’s looked it up on the internet to tell you that it’s normal, you realize that you’re really starting a family with somebody.”

Shiri and Jon are not in any rush to get married, they plan to spend the first couple of months just enjoying their new daughter.  “We’re planning on doing a big wedding after the baby is born,” said Shiri.

Congrats to Shiri and Jon on the birth of their new daughter!

Kim Kardashian: I Want to Raise My Children Not Just to See Color