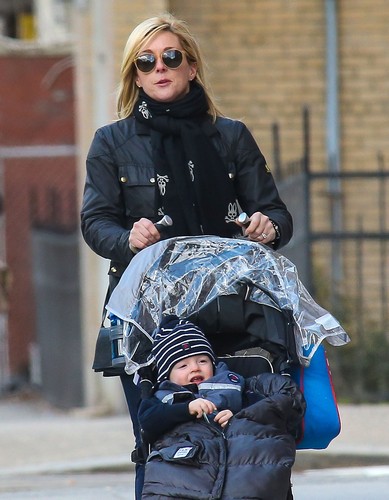 The ’30 Rock’ actress Jane Krakowski and her almost two-year-old adorable son Bennett Robert Godley tried to stay warm as they took a walk in New York City, New York on March 27, 2013.  Jane wore a cute scarf with a cute rabbit skull-themed motif and the mandatory movie star shades.  Bennett had on an adorable black and white striped hat.

Jane is married to English fashion designer Robert Godley since 2010.  Bennett is their first child together, he was born April 13, 2011.  So Bennett will be celebrating a birthday soon.

Jane is best known for her role on 30 Rock playing Tracy Jordan.  30 Rock ended in January 2013 and Jane spoke about the end of series.  She said, “It’s very bittersweet. It’s been those kind of days at work where everyone’s noticing a tear in someone’s eyes, and we all just have to make no eye contact whatsoever. I’ve been going through the halls like, ‘Nobody look at me. I’m going to lose it!”

We were sad to see the show go to, it was one of our favorites.  But we are excited to see what Jane will be doing next.  Enjoy the photos below of Jane and Bennett in NYC.