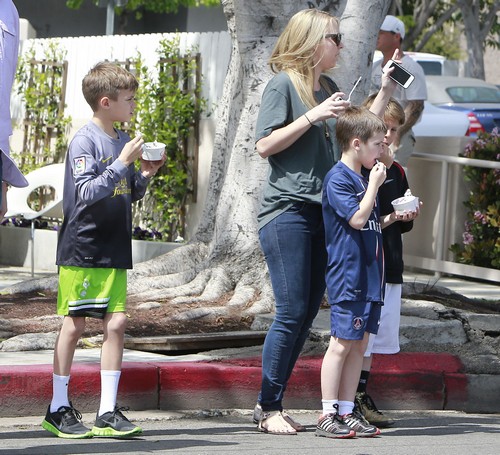 The Beckham boys were out and about and we caught up with they yesterday [March 29th, 2013] enjoying some frozen yogurt.  David & Victoria Beckham’s boys 11-year-old Romeo & 8-year-old Cruz stopped by Pinkberry with friends in Los Angeles, California.

The boys were dressed casually in shorts, t-shirts and runners and were accompanied by their nanny.  Mom, Victoria and Dad, David were not around.

Daddy David has stayed behind in France while the family is in LA,  he was seen training with his team Paris St Germain on Thursday.  David has a contract until the end of the season, although his wages are being given to charity.  Carlo Ancelotti is said to want David to stay at Paris St Germain for another year. “Extend his contract for another year? The decision has to be taken by the club, the player and the coach. But I am for it.”

Meanwhile Mom Victoria is said in Los Angeles to throw herself into fitness training with celebrity trainer Tracy Anderson.  She has been working with Tracy to get her body into bikini shape for the summer.

Enjoy the photos of the Beckham boys below, enjoying frozen yogurt at Pinkberry!

Brian Austin Green Strolls In The Big Apple With Noah