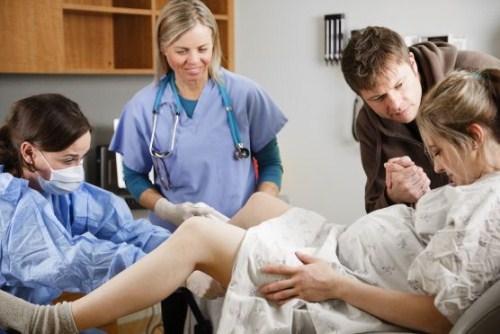 I have been amazed lately at the amount of ‘people I know’ who have elective inductions. I wouldn’t wish an induction on my worst enemy.  I think way too many people like the idea of the convince of having a ‘planned’ delivery, however, if mother nature intended it to be that way, it’d already be that way. My story is simply to open up the eyes of the undereducated when it comes to inductions and what it really means for you and baby (and all the stuff the doctor doesn’t tell you!). And don’t worry, I’ll spare you all the gooey details and keep it very clean so everyone can take something from my story.

At 37 weeks, due to medical complications I was induced with my first pregnancy. I was a first time mom and although I was new to the delivery world I was not new to google (and mom support groups). I went to all my doctor appointments knowing “everything”. My complications had been lingering since about 25 weeks gestation and the word induction had been tossed around very early on so I had been doing a lot of research. I went to my 37 week OB appointment and never ended up leaving. Due to my high blood pressure (caused by pre-eclampsia) my doctor had me sent into Labor and Delivery and have my induction started.  I was exactly 37 weeks when we started my induction that afternoon, around noon. My doctor promised me we’d have a baby by midnight! My husband and I were going through so many different emotions. He rushed home to pick up our bags while I got all set up for our induction! They let me have a little lunch and we were off!

They started my induction with a small pill that is used to soften the cervix around noon on Thursday October 15th. I went into my induction absolutely not dilated or effaced. My body was not ready for this, however, my blood pressure said it was time for baby! We pushed on and started some pitocin around 1 pm. It was a very low dosage of pitocin but it was definitely helping me feel some activity. Pitocin is a drug used in labor to help stimulate contractions. It often times makes the contractions stronger and longer then naturally produced contractions (in turn, making them more painful then normal contractions!). The afternoon and evening of the 15th was uneventful. We played games, rested, had some friends stop by after work (our hospital was on a military base), talked to family. I was uncomfortable but there was nothing unbearable about it; I totally thought I could do this! Due to my induction being medically necessary there were a lot of other things going on that wouldn’t necessarily pertain to a normal delivery but made my particular situation quite stressful. There are so many situations that are unpredictable in child birth!

The next morning rolled around and the doctors came in to see how I did through the night. By this point, I was starting to become uncomfortable from the contractions. My dosage of medicine had been increased through the night so the contracts were getting stronger and closer together. By about 11 am on Friday the 16th the doctors had my epidural ordered. I was thankful for that since I was starting to get uncomfortable. Once the epidural was set I was back to being content..just cranky from not eating, because after all you can’t eat while you’re in labor and since inductions are more likely to end in c-sections they REALLY cracked down on me! Once my epidural was set, a catheter was put in and I was bedridden until baby arrived! The finally checked my cervix again that afternoon and I was sitting at about 2cm dilated. I was so extremely disappointed. After nearly 24 hours on pitocin we weren’t making any sort of progress. They just upped the pitocin and just keep turning me (to keep from baby being stressed and my blood pressures from getting too high). It was unfortunately uneventful and boring.

By 6pm or so we started to have issues with my epidural line. Nurse after nurse messed with the machine to no avail. We called the anesthesiologist to see what he could do and he tried but couldn’t fix it either. I was now without epidural (for the duration of my labor for that matter!). Normally this wouldn’t be a huge deal as there are TONS of moms who have delivered babies naturally, however, due to the fact we were using pitocin to get my contractions going they were much stronger and more painful but also my body couldn’t create natural endorphins to help with my pain I was in. All in all, I was one tired, hungry, in pain and CRANKY momma! By this point in the game, I was only about 6cm dilated. I was progressing slower than average due to my body just plain old not being ready to deliver. From here, things pretty much went downhill at an alarming rate. By 9pm, we were talking to doctors about doing a c-section. Now, let’s recap, I started pitocin at 1pm on Thursday October 15 and by 9pm on Friday October 16th, I was still on it, and NO baby! My doctor ended up deciding not to do a c-section and we again, pressed on.

The night of Friday October 16th had to have been the worst night of my life. I have been through MANY painful things however, this tops it all. There really is no way to explain what a contraction feels like if you’ve never had one, but if you had, imagine a normal contraction and multiply it by 10. That’s how strong it felt. They outlast any ‘natural’ contraction at their peak and are just plain awful. Now, imagine doing it all pain free. I hardly got any sleep that night, still had not eaten since Thursday afternoon (which was a light lunch as it was because I was worried about getting sick from nerves) and was pretty much miserable. By this point the joyous thoughts of meeting my baby were the last thing on my mind. There were women who had checked in after me, had babies before me and were already in their recovery rooms before I was even able to deliver.

Finally, October 17th rolls around, my son’s birthday! I remember being completely restless all night long and finally around 3 am I was dilated enough to start pushing. So we got all set up and went for it… for an hour! An hour of pushing and nothing. I was exhausted in every form possible. The doctor came over to my side and told me that since all this pushing was stressing out baby, and he clearly wasn’t coming, let’s take a break and try again in an hour. I was about ready to do some serious damage to some of the people in the situation. So, just like my doctor said, TWO hours later.. he finally returned. We got all set up again and started pushing, again. Finally 58 minutes later, my son was born! After 40+ hours into labor, 2+ hours after pushing and a million things inbetween that I’ll spare the more squeamish readers from, my little 5 pound 13 ounce boy was born!

The moral of my story is this: inductions, although possibly convenient are so hard on mom and baby and if they go wrong they are the most miserable thing you will go through. Obviously not every induction goes like this and not everyone will fare the same, but please remember that stories like mine are real and do happen and are obviously NOT what the doctors will tell you. I was notably one of the worst situations to go through our hospital (and when I went to deliver my daughter 20 months after my son I had some of the same nurses who promised me they wouldn’t let it go that far again). I have heard every story in the book as to why inductions are “okay” and there are very few situations where they actually are and by that I mean actually safe! (my doctor is going on vacation and it’s our anniversary and we want baby now cuz my legs are the size of tree trunks and I can’t sleep on my stomach anymore, isn’t one of them!) Even my induction which was medically necessary was hardly safe and we do feel that it caused lasting neurological damage to our child. Please, if you are considering a scheduled induction “just because” please consider ALL your options, not just the options that sound good on the outside.

Mariah Carey Is A Normal Mom, She Even Changes Diapers!