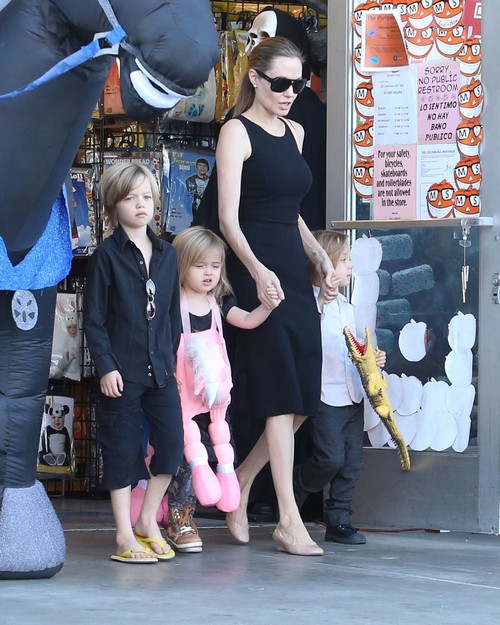 It looks like Angelina Jolie and Brad Pitt are dealing with a situation that should probably have been anticipated. They’ve decided to allow 4-year old daughter Vivienne to take a starring role in Disney’s upcoming film, Malenificent and with it comes a nifty paycheck of $3,000 a week. The couple’s 5 other children are fuming over the situation and are thinking that preferential treatment got Viv the role.

According to a source at the National Enquirer things at home are a little chilly.  “They look at it as a big allowance. Her screen debut has caused a major rift in the family. Now they all want their own turn in the spotlight.”

If Angie and Brad allowed Vivienne to work I’m sure the others will eventually be handed the same kind of opportunity when the situation arises. Should they be though? Is it really in the kids best interest to introduce them to the very adult world of film making at such a young age? Angie already flies in the face of giving her kids a normal childhood, by traipsing across the continent with them rather than realizing the importance of a schedule, consistent friends and a school that they can truly lay down roots in.

Will it all amount to a bit more damage than good in the long run? Will they end up spoiled beyond belief and lacking respect for the little things that normal, grounded people thing matter- like budgeting money and stability. Tell us your thoughts in the comments below!

Kim Kardashian Leaving Reality TV To Give Her Baby Privacy