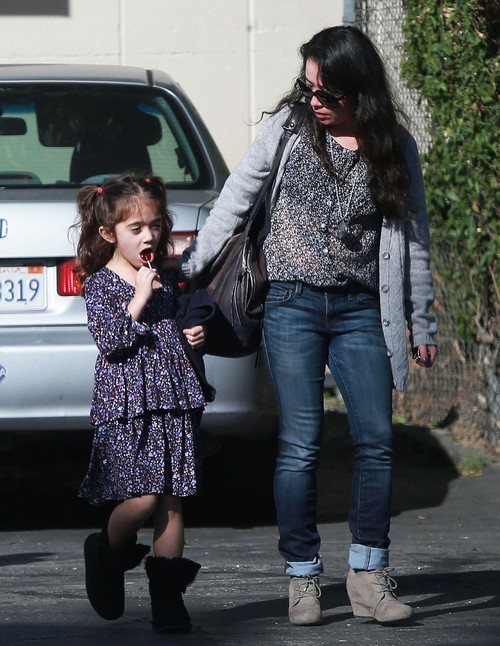 Salma Hayek’s daughter Valentina Pinault looks more like her mother Salma everyday, such a little mini-me!  We caught up with the adorable five-year old leaving her music class with her nanny in Los Angeles, California on February 27, 2013.  Valentina looked adorable in a print dress super cute black boots.  Valentina was enjoying a lollipop as a reward for a great dance class, maybe!

Salma married Valentina’s father PPR CEO François-Henri Pinault on Valentine’s Day in 2009.  The couple later remarried again in April 2009 in Venice.  Salma is not only mom to Valentina but she is step-mother to Francois’ other children.  He has two children with ex-wife Dorothée Lepère, as well as a six-year-old son from a brief relationship with supermodel Linda Evangelista, which ended shortly before he started dating Salma.

Salma recently said how happy she was and how her life has changed,“My life is completely different. It’s great thanks to my daughter Valentina and my husband.”

Check out more photos below of Valentina leaving music class!