You can just call 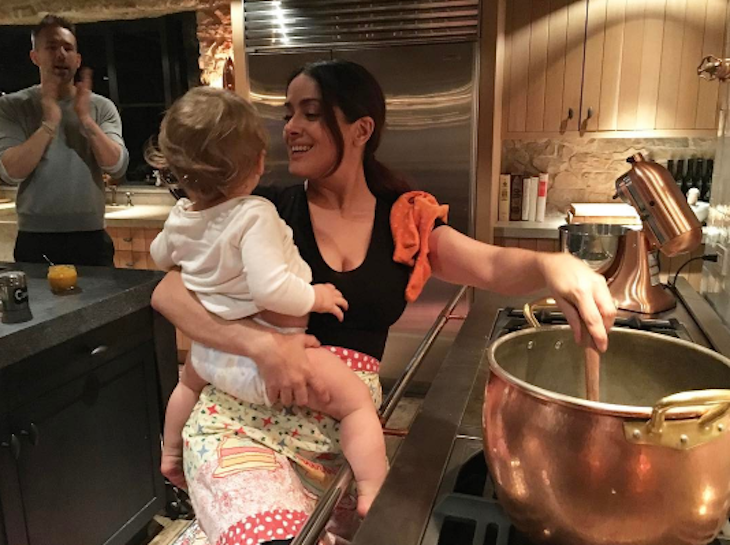 Ryan and Salma co-star in the upcoming movie together, ‘The Hitman’s Bodyguard.’ Salma, who has a 9-year-old daughter named Valentina herself, captioned the throwback photo with, “When your friends invite you for dinner and you end up doing all the work. #hitmansbodyguard #ryanreynolds #tbt.”

Ryan, who many fans consider to be the funniest celebrity dad on social media, recently opened up about his 2-year-old daughter James, calling her a “dime-store thug” after she accidentally swiped a few tootsie rolls on the set of his latest film.

The proud father joked to People Magazine, “My daughter’s like a dime-store thug on set. She’ll open her jacket and there’s like a hundred Tootsie Rolls inside.”

Still, Ryan says that he absolutely loves having his two daughters on his set whenever he’s at work. He says it makes it easier for him as he’s still trying to find a good balance between his career and his family.

The 40-year-old actor added, “I like having my kids at work. But you wanna walk that line because a lot of other crew members would love to have their kids at work, too. You want them around, but you don’t want to feel like you’re imposing them on set.”

And even though he might sometimes feel exhausted trying to keep up with his two small children, he says that he would love to have many more children with his wife Blake in the future.

Ryan said, “If I could have nine daughters I would be thrilled. My kids, fortunately they have both of our genes. They have my wife’s ability to just stay up all hours. Yet they also have my genes, which is to wake up no matter what at 5 a.m.”