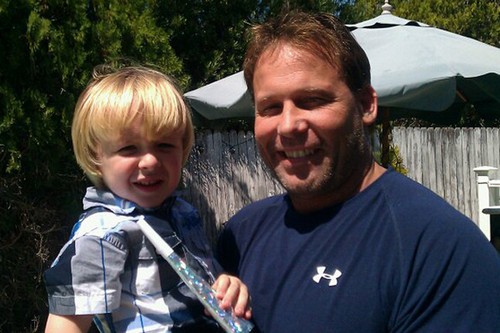 Mindy McCready‘s son Zander has already had a rough life and he’s only 6! The kid has been the subject of an ugly custody battle and has bounced from home to home because of it. He watched his parents split and grew close to Mindy’s deceased boyfriend, David Wilson and his 9-month old brother Zayne. On Feb. 6th Zander was removed from his home and placed in a foster care when Mindy was hospitalized. Now the two parents that he had lived with are dead and his biological father, Billy McKnight is already fighting tooth and nail to gain custody.

McKnight made the morning show rounds this morning, expressing his agonizing desire to bring his son back home with him, rather than being stuck in the system in Arkansas with no one there to even visit him.

“He (Zander) shouldn’t have been taken from me to begin with… He has a happy home here (in Florida). I can provide for him. It’s just been a really big mess and enough is enough. He’s up there, all alone. He has no family in Arkansas. He has plenty of family who love him here…”

What a heartbreaking story. McKnight also is hoping that Zander and Zayne can be raised close enough together that they’ll still maintain a brotherly bond. Do you think Mindy’s mother will fight for custody of both boys insisting that they not be separated at this point in time? Should they be kept together or raised by other family members? I would think Zander might really cling to his baby brother now and feel like he needs to watch out for him now that their parents are gone. What are your thoughts on this sad story? Tell us in the comments below!

Jessica Alba Has a Family Day