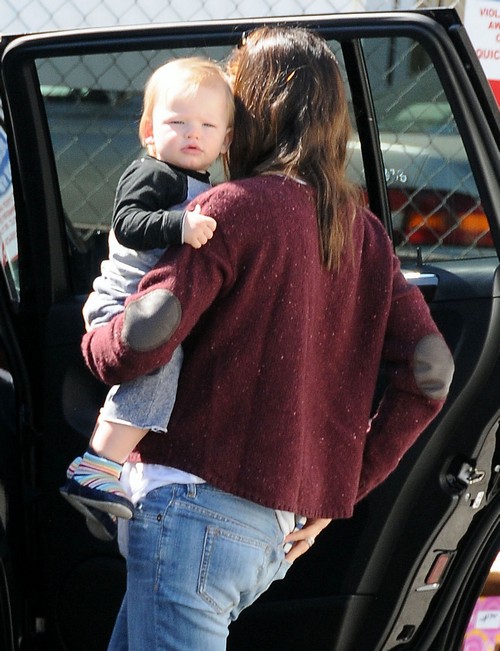 Jennifer Garner and Ben Affleck’s little boy Samuel Affleck turns one-year-old today. Ben Affleck‘s first son arrived in Santa Monica, Calif. Feb. 27, 2012.  Jennifer has said about her little boy, “He’s so chill.  He reaches when he sees me and he laughs a lot. He thinks I’m super funny. What more do you want?”

We caught up with Samuel yesterday when he was spending  the day with Mom, Jennifer in Brentwood, California.  Jennifer took Samuel to a toy store, perhaps they were checking out birthday gifts before heading out to lunch with friends.  Jennifer was unwinding after walking the red carpet at the 2013 Academy Awards. The couple made their way to Vanity Fair‘s annual after party to celebrate Ben’s Oscar win for Argo as Best Movie on Sunday.  Ben also had a present for his wife and children.  Ben shaved his beard which his children were not fans off.

Jennifer recently said that having three children can be overwhelming but Ben is a dedicated father, which is lucky for her.  The couple have three children, Samuel, 1 and daughters Violet, 7, and Seraphina, 4.

Jessica Simpson Is Moving Ahead With Her Baby-Clothing Line