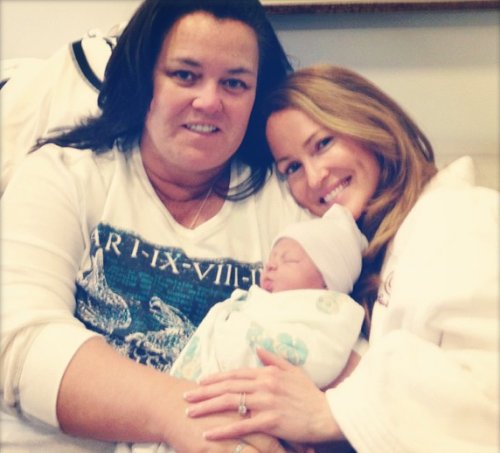 First comes loves, second comes marriage, next comes the wives with the baby carriage! Rosie O’Donnell and new wife Michelle Rounds yesterday announced via Twitter that the newlyweds have adopted baby daughter Dakota. Rosie and Michelle met and started dating in summer of 2011 and got engaged that December. In similar public fashion, Rosie announced to her audience of The Rosie Show that the two were getting married.

Despite that public announcement and a plan for a summer 2012 wedding, the couple wed in secret in June 2012 just before Michelle had a series of surgeries for a rare and complicated disease associated with desmoid tumors. But Michelle is now recovered and just in time to join wife Rosie in expanding the family.

After Rosie and Michelle were engaged, they tried for awhile for Michelle to get pregnant, but once her serious illness was diagnosed, this seemed less possible. O’Donnell’s rep said of Michelle’s illness, “It is such a rare tumor. It took them quite a while to get an accurate diagnosis. She had several gastrointestinal surgeries to remove the desmoid turmors. She is now on the road to recovery.”

Rosie announced their wedding on her blog saying, “We married in private before [Michelle’s] surgery, just the [two] of us. When we r both well enough will have the wedding of r dreams surrounded by those we cherish. Thankful for the love and support so many have given us during these trying times. Including all of u stranger-friends connected thru invisible strands of wi fi.”

After their June wedding and the first of Michelle’s numerous surgeries, Rosie had a heart attack. Wow! That’s too many medical dramas for a new marriage to have to bear.

But both Michelle and Rosie are back in good health and ready for mommyhood. Rosie already had four children with her ex Kelli Carpenter – sons Parker and Blake and daughters Chelsea and Vivienne. The baby announcement came via Twitter from Rosie’s account and read “we r thrilled to announce the arrival of r daughter Dakota – #withloveandthanks – AMEN” along with a photo of the two of them holding the baby.

Then today Rosie couldn’t hold back on her baby joy, tweeting twice more and with photos to accompany them. Rosie wrote “Only love” with a photo of Michelle and daughter Dakota. Then later she wrote “Nothing compares to this…” that included a photo of Rosie and Dakota.