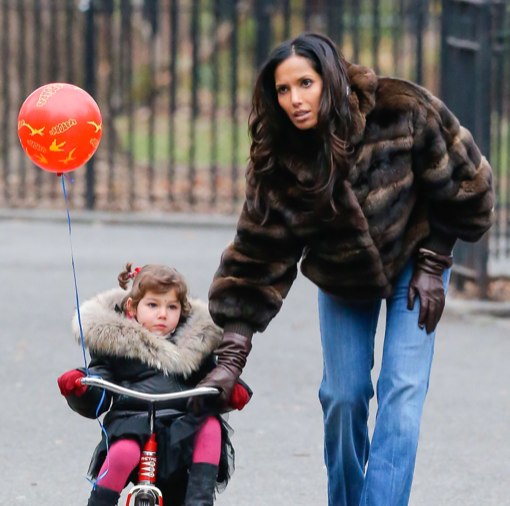 The actress was dressed in a fur jacket and jeans while helping the youngster to ride a tricycle around a local park. Krishna also wore a fur trimmed jacket with a skirt, red tights and boots.

Lakshmi admits that being a single parent is not always easy.

“It does get overwhelming sometimes,” the Top Chef host told the November 2012 issue of More magazine.

“I have struggled with it. It’s not easy, but I have a great career, and I have my daughter. So what I don’t have is not as important to me as what I do have.”

In October, Lakshmi lost a long fought out custody battle with Adam Dell, the father of Krishna.

Contention between the two arose when Lakshmi refused to put Dell’s name on the baby’s birth certificate.

Dell, claimed in court papers that Lakshmi tried “to minimize, if not eliminate his role in Krishna’s life and to install” her late billionaire lover Teddy Forstmann as the child’s father.