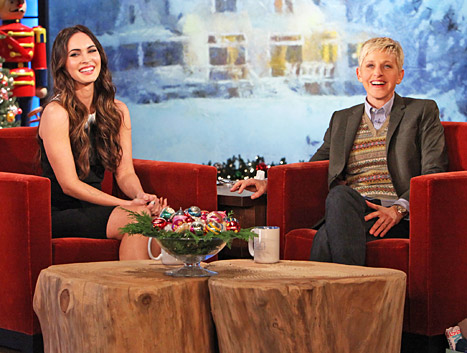 Megan Fox who has yet to share any pictures of her 3-month-old son Noah claims he looks exactly like his daddy Brian Austin Green.

“He looks, I would say, 70 percent like Brian,” the new mom tells Ellen DeGeneres in an interview airing Wednesday, Dec. 19. “He was his identical twin when he came out [but] recently he’s been getting chubbier and everyone’s like, ‘Oh, he’s so chubby — now he looks like you.'”

“I don’t know how I should take that,” she jokes.

The This Is 40 actress also told DeGeneres about how actress Reese Witherspoon unintentionally helped her deliver Noah in secret.

“She went into labor the day before I did, and all of the paparazzi followed her to Santa Monica. So when I went into labor, I went to Cedars [Sinai Medical Center in L.A.], and nobody cared or knew I was there,” Fox explains. “So I got in and out. I left the next day and nobody knew. It was a big secret for three weeks.”

Watch The Ellen DeGeneres Show for the full interview.

Beverley Mitchell Is Having a Baby Girl