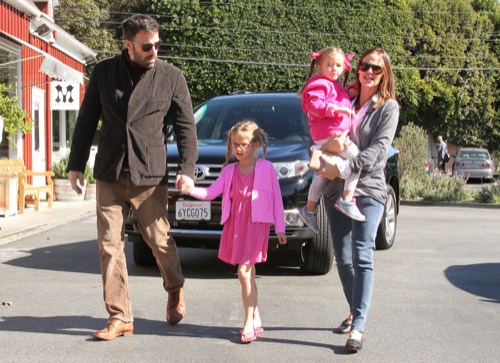 Jennifer Garner and Ben Affleck took their daughters Violet and Seraphina to the Farmers Market in Pacific Palisades, California on Sunday (November 11). The two girls matched in pink outfits and braided pigtails while they stuck close to their parents as they browsed the stalls.

Garner has signed on to play in the upcoming film, The Dallas Buyers Club. The drama which stars Matthew McConaughey centers around a AIDS patient in Texas in the 80s who organizes a ring for fellow patients to access HIV medicine smuggled into the country from Mexico. The role Garner will be playing in the movie is unclear.

The mom of two was spotted in New Orleans last week where filming of the movie has started.

Kourtney Kardashian Is a Normal Mom

Resale Shopping- Being a Mom with a Budget!