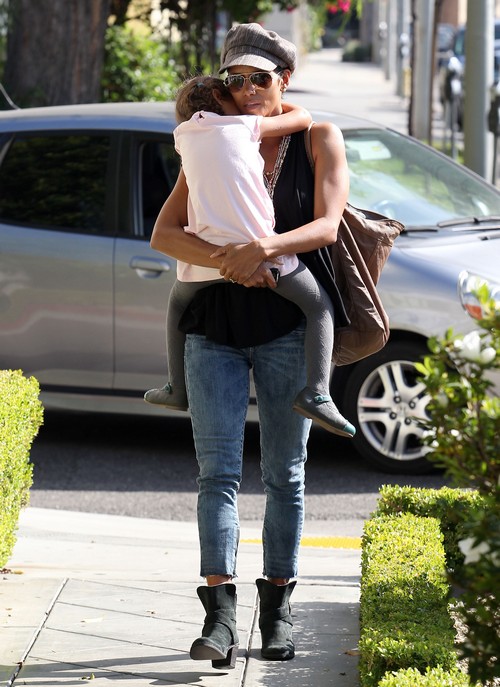 Halle Berry’s latest movie, Cloud Atlas may be bombing at the box office, but the star couldn’t be happier with her four-year old daughter, Nahla. Halle stopped by The Wendy Williams Show the other day and tackled some of the hard questions about her personal life. She explained how she truly believes that waiting until she hit her 40’s to become a mother was absolutely the best choice for her. She can’t imagine being as lost as she was in her 20’s and also having to figure out how to parent a child.  Wendy ventured onto the subject of babies in general and asked if Halle was perhaps planning for another little one with current beau, Oliver Martinez. The actress semi-dodged her feelings on the subject, but did volunteer that Nahla is ready,

“Every night we pray to God, and she’s so sweet. She says, ‘God, please bring me a bunk bed and a baby sister.’ And I say, ‘I can do one of those things, I know for sure! The other one we have to keep praying on.’ What do you say to her when she wants that and can’t understand why God’s taking so long, you know?”

That sounds like the actress has maybe been trying to conceive with her French actor boyfriend, or else it was a nice way of ducking out of the real truth, which could be that another child is the farthest thing from Halle’s mind.  After being wrapped in such a messy court battle with ex, Gabriel Aubry over Nahla’s custody and visitation, I have to wonder if Halle would want to risk creating another baby-daddy situation.

Do you think Halle has been trying for baby number two or do you think all of the drama surrounding Nahla’s has actually soured her on the idea? Tell us your thoughts in the comments below!