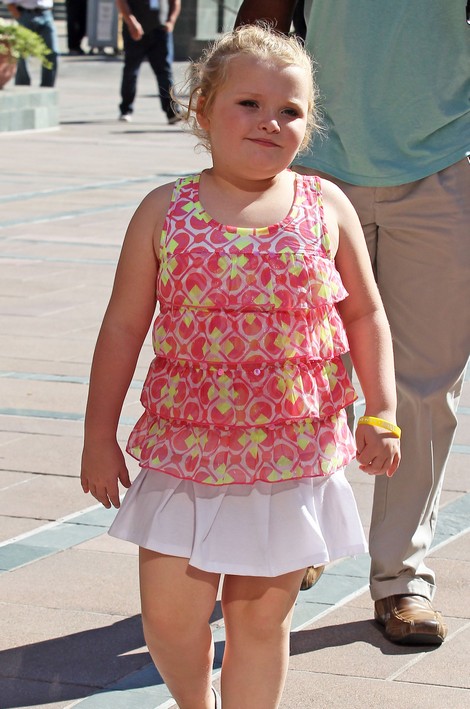 It can’t be easy to find yourself shoved into the spotlight at age six. I mean, very few people seem to handle instant celebrity well, let alone expecting a child to do so! The problem is that doing publicity now comes with the territory for Honey Boo Boo’s Alana Thompson.  The young star and her coupon queen mother, June Shannon have recently hit the media circuit and the interviews have been somewhat disastrous.

While visiting the Dr. Drew show Alana pretended to be asleep until June eventually prodded her to take part in the interview.  Dr. Drew asked if she likes being on television and Alana flipped out saying, “No! Because fans come up to me and I hate it! Yes, I do!” That taping wasn’t a fluke either. It seems the redneck family has left quite an impression on several different media outlets. It seems that Alana has been throwing some pretty big tantrums and Mama June doesn’t know how to get her daughters behavior under control.

A clinical psychologist named Dr. Judy Kuri­ansky told The Enquirer “I have no doubt that she DOES hate being on TV and being inundated by fans,” Dr. Kuriansky continued. “She just wants to be a little girl. She is in tremendous con­flict, and it could erupt at any time into an explosion of rebellion, like it did on Dr. Drew’s show.  The way she is going now, she could end up being vulnerable to ad­dictive behavior with sex, drugs or alcohol. She is behaving in a very un-childlike manner, and her peers will not understand her and may make fun of her as she gets older.”

It’s not the first time that this clan has come under fire. The Enquirer also recently revealed that Alana is still in diapers despite being in second grade, a situation that also indicates that there are some problems brewing in the youngsters’ life.

Do you think the fame is turning Alana into a holy terror after just a few short months? Should Mama June pack it in now and decide that filming is not in the best interest of her family? Tell us your thoughts in the comments below!