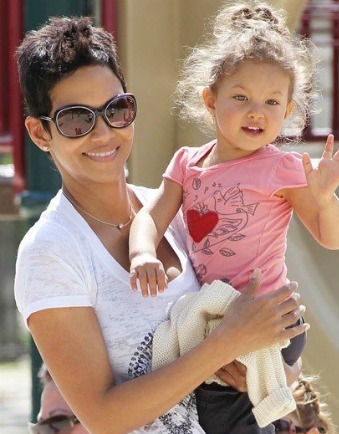 Halle Berry, the cohort in the Olivier Martinez/Gabriel Aubry brawl, was seen dropping off the beautiful and French-looking Nahla at a school in Los Angeles on the 29th of November. Little Nahla has been the centerpiece of one of the most disturbing throw downs in Hollywood history. If you’ve been living under a rock with Bruce Jenner, here’s a bit of a recap:

On Thanksgiving day, Martinez and Aubry were involved in a brawl of epic proportions, after Aubry dropped off the beautiful Nahla at her mother’s home. The fight resulted in a pulp-face, a broken rib, and an arrest for Aubry, while Martinez walked away with a busted hand. The fallout from the fight resulted in nitpicking, restraining orders, and more drama than those Real Housewives shows.  Although Aubry was arrested for misdemeanor battery after the brawl, LAPD detectives have revealed that he won’t be criminally charged, as the fight was “mutual combat.” There were rumours that Aubry might be deported back to his native Canada due to the arrest, but these rumours have since dissipated. Fortunately, a week-long battle of arrests, restraining orders, and deportation rumours, finally came to conclusion when Aubry and Berry reached “an amicable agreement” on the 29th of November.

Be it as it may, many critics of the trio of dimwits alleged that Nahla would eventually be the only victim of this fight, as physical wounds heal, but seeing your own dad’s head being smashed against the concrete by your stepdad, won’t go away as quickly. According to a source for Us Weekly, “They keep playing this game and Nahla is used as a pawn. It’s her I feel sorry for.”

In the end, it’s not about ego stroking and who throws the hardest punch, it’s about Nahla. So, hopefully, these three obviously irresponsible adults will pack in their antagonism and focus on bringing peace and harmony to Nahla’s life.