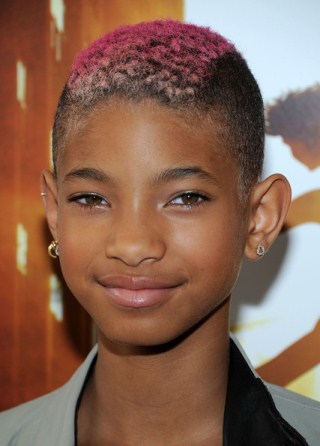 Willow Smith, the controversial daughter of Jada Pinkett Smith and super-famous daddy Will Smith, was in the dog box of public opinion recently. The 12-year-old singer removed all of her hair and opted for a short, spunky buzz cut, but several critics pointed the finger at her mother, Jada, and questioned her parenting style.

However, one does not mess with the Jada.

According to a People magazine article, Jada took to Facebook to face her critics. “This is a world where women, girls are constantly reminded that they don’t belong to themselves; that their bodies are not their own, nor their power or self determination,” she wrote on the popular social media site.   She specifically addressed the critics who questioned why she allowed her daughter to chop off her hair “and sport a super-short style a few months ago.”

She continued, “Willow cuts her hair because her beauty, her value, her worth is not measured by the length of her hair. Even little girls have the RIGHT to own themselves and should not be a slave to even their mother’s deepest insecurities, hopes and desires.”

Jada’s super famous husband, Will, also agreed with her parenting choices. He told Parade magazine, “When you have a little girl, it’s like how can you teach her that you’re in control of her body? If I teach her that I’m in charge of whether or not she can touch her hair, she’s going to replace me with some other man when she goes out in the world.”

There we have it Celeb Baby Laundry readers, the Smiths aren’t just super famous cool people who are saving the world one day at a time; they’re also progressive, interesting, and unique parents. Do you think Willow’s hair looks strange? Would you have this same attitude towards your daughter? Do you take Jada’s words as gospel? Let us know your thoughts in the comments below.