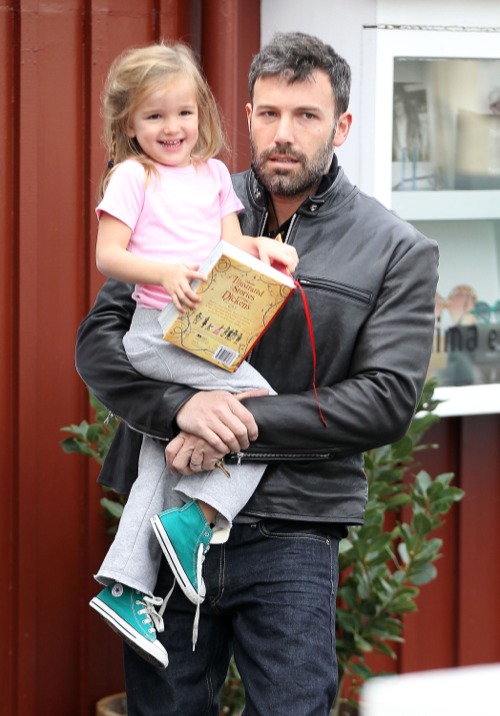 Now that Ben Affleck has finished promoting his latest film Argo, he has taken over the parenting duties while wife Jennifer Garner films The Dallas Buyer’s club in New Orleans.

The father of three was spotted leaving the Brentwood County Mart after enjoying a early breakfast with his daughter Seraphina on Thursday. The three-year-old who was being carried by her dad wore a pink shirt, grey sweat pants and green hightop Converse sneakers while holding a book.

The actor who directed and stared in Argo admits he misses having somebody to kick him ”in the ass” when he’s directing himself.

”That’s actually one of the most important things you miss when you direct yourself; you don’t have a person to kick you in the ass if you don’t have enough energy,” he told.

”Other than that, I find it liberating, because I’m not being directed by somebody with whom I disagree. The environment I create for myself and the other actors is hopefully one of near-complete freedom, where they can do as many takes as they want, take risks and I sort it all out in the editing room.”

Many people in the industry are speculating Argo is worthy of an Oscar. What do you think?

Pink Is Smitten With Willow