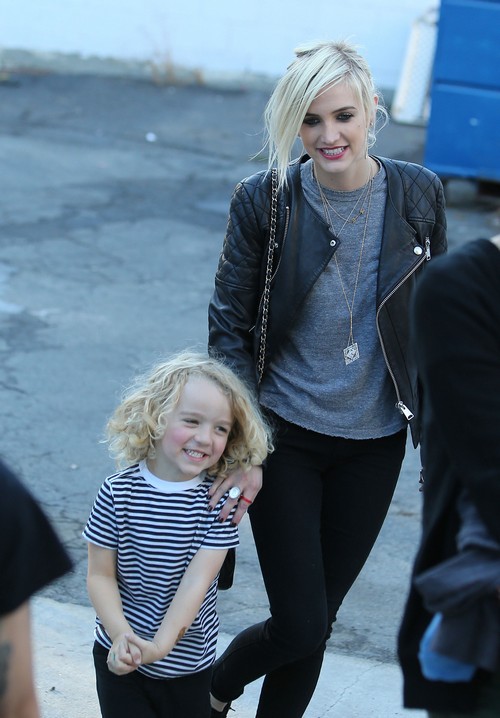 Ashlee Simpson & Pete Wentz threw their son Bronx his own private super hero birthday party at The Coop in Studio City, CA on November 20th, 2012. Socialite Nicole Richie stopped by with her daughter Harlow who is dressed like a princess. Ashlee’s separated parents Tina & Joe Simpson also stop by the party but Joe tried to hide under a hoodie!

Pete Wentz used to be one of the hottest new singers in the music industry as a member of Falloutboy, the pop/rock group that dominated the airwaves for many months. Today, Pete is a father, an ex-rocker, and the new host of Best Ink – an Oxygen channel reality television show. On Sunday, the 18th of November, Pete and his Demi Moore-lookalike girlfriend Meagan Camper took his son, Bronx, to the farmers market in Studio City, California. The little one’s 4th birthday (can you believe he is four already?) was on Tuesday (20th November), so dad decided to spoil him for the day.  Little Bronx went sliding on the bouncy house and enjoyed an amazing-looking snow cone.

Wentz’s long struggle with Bipolar Mood Disorder has been heavily publicized and documented in the media, but it seems that Wentz’s life is finally back on track. He tweeted from the set of Best Ink, “On the set of @Best_Ink with [spoiler alert!] season 2 judges @whatsnottalike @Sabina_Kelley @hannahaitchison #BestInk.” Wentz also owes his newfound patience to little Bronx, and said in an interview recently how fatherhood changed him, “Having a child has definitely taught me patience on a whole new level, which is a really important lesson for me to have learned in life. I don’t know what my threshold was before, I’m not even really sure. But I realize that everything else isn’t so important. At times when I would find myself being, like, ‘Ugh, why can’t they just get the Starbucks faster!’ now, I’ll just sit back and wait. It’s a really good thing for me to have learned. In this industry, you can definitely get caught up in thinking you are the most important person, no matter what.”

Bronx’s mom, Ashlee Simpson, has also been out of the glare of the Hollywood spotlight recently, but her father’s toils, troubles, and recent gay scandal rocked the family to its core and brought the Simpsons back out from behind the hidden Christmas trees.