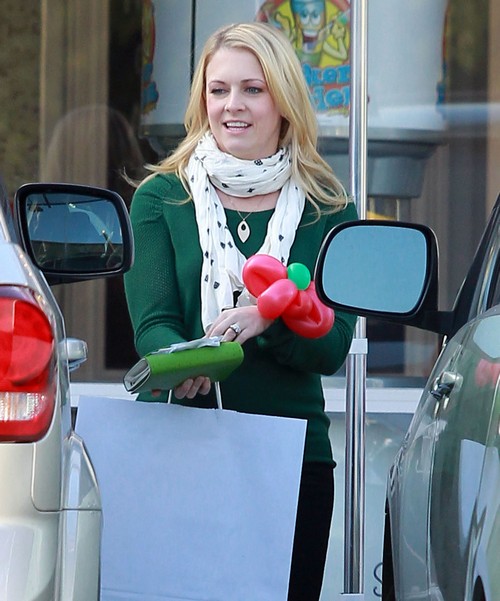 Melissa Joan Hart, the mother of three boys, is dreaming of a life with daughters! Her three sons, eldest Mason Walter, middle child Braydon Hart, and youngest Turker McFadden, are the terrible three. Melissa’s eldest, Mason, “just would not calm down” during The Hub’s Playdate Premiere Party sponsored by The MOMS on the 10th of November in New York City. People magazine asked Melissa about her children when she attended this event, where a new Guinness World Record was set for the biggest coloring book ever. According to Melissa, “[He] just would not calm down, he was such a wild man. And I would keep saying, ‘Why can’t I have a little girl that just sits and colors?’” Mason, 6-and-a-half-years-old, has moved on to create his own picture books, but according to his mom, “He steals our printer paper and he makes up books about different animals. He has a collection of books he’s made under his bed.”

Melissa welcomed the latest member of the tribe in October, but she would love nothing more than to expand the family further. Unfortunately, there’s that little process called “pregnancy” that’s putting a damper on her plans to build a small nation. “I would have seven babies if I didn’t have to be pregnant. I hate being pregnant – the lack of energy at the beginning and having to change your diet. It’s a huge adjustment and you have to change your whole lifestyle for a few months,” the Sabrina, The Teenage Witch star explained.

Fortunately, there is a light at the end of the tunnel for Melissa’s latest little man child terror. She explains, “What gets me through the rough months [is that] I remember that it is going to get better as his personality changes. Soon he is going to be crawling and walking.” Luckily, Melissa’s other two terrors lend a helping hand when it’s diaper duty. “The older boys help with diaper changes. I am like, ‘Can you grab Mommy that?’ and after weeks [of that] they are like, ‘Gosh, you can never do anything for yourself,’” Melissa said with a laugh.

How would you deal with a small tribe of little man people? At least they help with the troubling diaper changes, because that’s most probably the scariest part of being a new parent! Hey, if Melissa can do it, you can do it! Let us know your thoughts in the comments below!

Melissa Joan Hart: “I Would Love To Have More Kids”