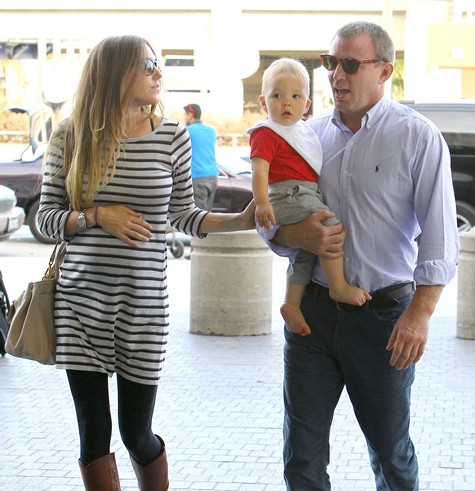 It looks like Guy Ritchie really has been bitten by love once again. He and model girlfriend of more than two years, Jacqui Ainsley decided to clue the world in on their engagement recently, by a simple flash of Jacqui’s ring finger. The couple was spotted strolling through LAX with their one-year-old son, Rafael on Sunday night. Back in July, Jacqui announced that she’s expecting the couple’s second child and the twosome couldn’t appear more loved up if they wanted to.

The British director spent 8 years married to Madonna and back in January he told Details Magazine,

“I enjoyed my first marriage. It’s definitely not something I regret. The experience was ultimately very positive. I love the kids that came out of it, and I could see no other route to take. But you move on, don’t you?”

It doesn’t take a detective to see just how well Guy has picked himself up and moved on, now does it?  The couple appeared very happy and relaxed while traveling with their baby boy on Sunday, making the outing a family affair. She wore black leggings and a comfy striped jersey dress and Guy was in jeans, a white button down shirt and loafers. Jacqui is a drop dead gorgeous mother and she wears the baby belly quite well!

It’s nice to see that being married to Madonna hasn’t soured Guy on marriage in general. Do you think Guy and Jacqui will actually tie the knot?  They sure do make a cute Hollywood family, don’t you think?

The Psychological Role Of A Nanny: Prince William Attends The Funeral of His Childhood Nanny Olga

Jacqui Ainsley Enjoys a Stroll With Her Kids