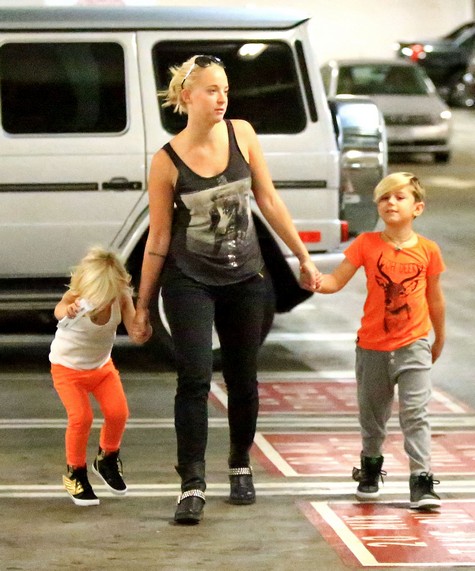 No Doubt singer Gwen Stefani and her hubby Bush frontman Gavin Rossdale‘s two boys Kingston Rossdale and Zuma Rossdale went shopping at Target with their nanny yesterday (October 28th, 2012)  Maybe the two cuties were heading to target to look at some Halloween costumes.

We already spotted them last week, as they got into the Halloween spirit with their parents visiting Shawn’s Pumpkin Patch in California.  The family had a great day together spending the day at the pumpkin patch.  The two boys really got into the spirit dressing in costumes.

Meanwhile Gwen and Gavin have been dealing with some serious rumors that their marriage is dunzo.  The two have been seen leaving a therapist, Dr. Adrien Survol Rivin‘s office which caused the internet to go ablaze with breakup rumors.  They were attending a couple’s therapy session.

However, Gavin put a stop to the rumors saying, “Of course not!”   He described his relationship with Gwen as perfect.  He also went on to say how disgusting it is that paparazzi followed them to the session.

Enjoy more pics of Gwen and Gavin with their Nanny heading to Target to go shopping!