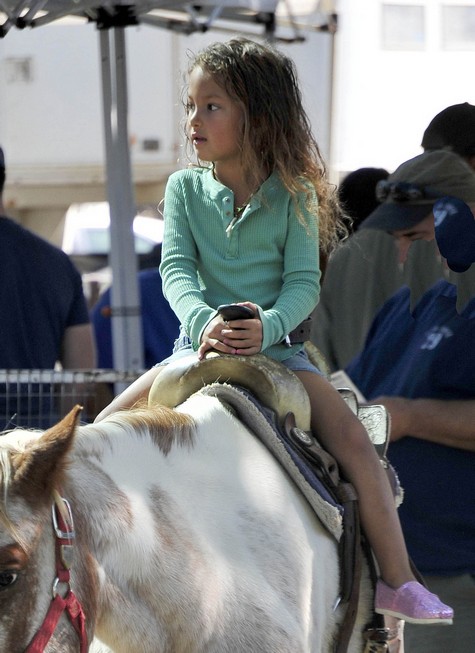 Nahla Aubry, adorable daughter of Halle Berry and Gabriel Aubry got to ride a horse 5 times her size while visiting the farmers’ market in Studio City, California yesterday. Halle’s little girl likely remains her favorite bright spot in a life that has certainly had its share of negatives’ lately. The custody and visitation of little Nahla is civil at best. Halle has attempted, so far unsuccessfully, to pack up her daughter and move to France out of supposed safety concerns. Those close to her ex believe that it’s a clear cut plot to try and keep Nahla from spending time with her father, Gabriel.

Even the box office hasn’t been kind to Halle in recent years and this past weekend her new film debuted as a clear cut bomb. Even Tom Hanks couldn’t save the mess that is Cloud Atlas. The huge budget, sci-fi flick made a measly 9.4 million in its’ weekend opening. Not good for a film that was filmed with a $100 million budget and obviously no one will be making any money on this bomb.

Do you think Halle will ultimately succeed at keeping Gabriel from his daughter? Do you think that her attempts are even justified? We see Nahla out quite a bit with her mom, do you think that Halle is doing a good job raising her? Tell us your thoughts in the comments below!