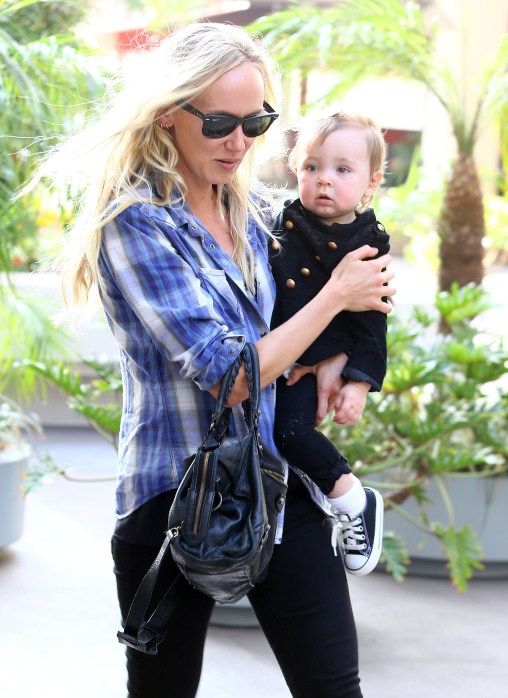 Kimberly Stewart and her 1-year-old daughter Delilah had a mommy-daughter day in West Hollywood, Ca on Friday. The duo were pictured leaving the Newsroom Cafe where they enjoyed lunch together.

The model looked casual in a plaid shirt and black jeans she paired with boots while carrying Delilah.  The tot looked cute as a button in a black jacket with matching tights and Converse sneakers as curiously looking at the picture takers.

Stewart and Delilah’s father actor Benicio Del Toro only dated for a short time before she got pregnant. However, he is determined to be an active father now that he has a child.

“You’ve gotta make sure, economically, now you are living for someone else. So there’s a responsibility here that I never had before. When I worked, I only looked at myself and now I’ve gotta think there’s someone else. We need to make some savings so that she goes to school. Eventually she’ll decide what she wants to do, but there is this element of being ready for the options. And that’s kind of different.”

Becoming a father has also made him rethink the roles he takes on.

“Perhaps I will like to get involved with things that have to do for kids, within the world of cinema,” he says. “And I’ve always kind of wanted to, because I am a kid myself in a way.”

Do you think Del Toro can move from bad boy role to cartoons?

Reese Witherspoon Is Doing Well After Birth Of Tennessee