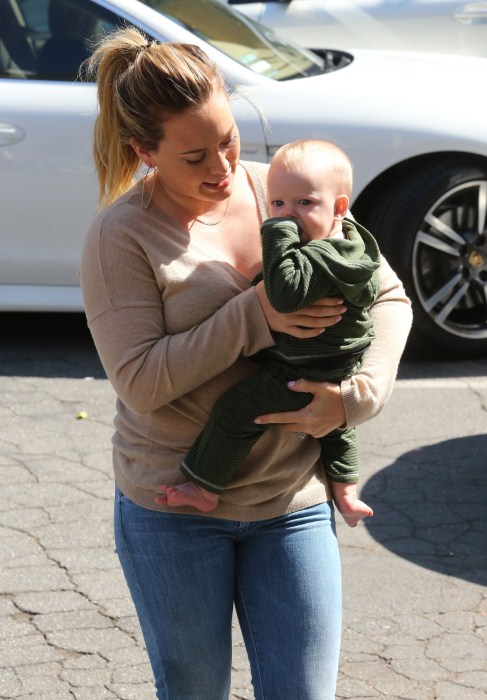 Hilary Duff spent the day with her son Luca in Beverly Hills, Ca on Wednesday.  The singer stopped by a furniture store for a quick look and then headed to lunch with Luca.

Duff recently told Parents.com that she worries about bringing up her son in the spotlight and is reluctant to let him follow in her footsteps.

“I’d say, ‘Are you sure?’ (if my son wanted to act). My sister and I said that same thing to my mom, and she encouraged us. I’m so happy she did, and I would not change my life for anything. But it’s tough, and it’s totally different than it used to be,” she told.

“I am even scared of (Luca) growing up getting his picture taken all the time and feeling different. I saw a rag magazine the other day – I was having my hair done or something – and the headline said, ‘Who Wore It Better?’ and the photo showed (Tom Cruise’s daughter) Suri Cruise and so-and-so’s kid. They had the same dress on, and (magazine editors) put these kids up against each other. I’m just thinking that this is sickening. Now that I’m a mom and I have a child, I can’t imagine. It’s not right,” she added.

What do you think about raising children in the spotlight?

Nick Lachey Explains Why They Chose The Name Camden